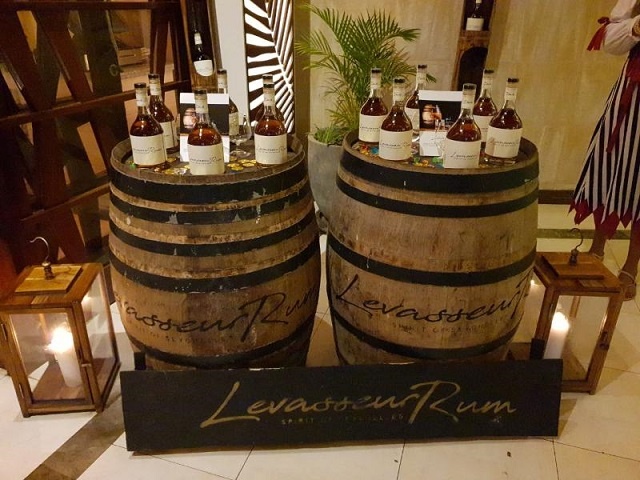 The dark rum which is the brainchild of local entrepreneur Marco Francis has been on sale for the past two months after two years of preparation. (Marco Francis)

(Seychelles News Agency) - Rum connoisseurs can now add a new spirit to their collection following the launch of Levasseur Rum on the local market.

The dark rum which is the brainchild of local entrepreneur Marco Francis has been on sale for the past two months after two years of preparation.

The rum is inspired by Olivier Levasseur -- a notorious pirate -- whose treasures are believed to be buried at Bel Ombre, a district in the northern part of Mahe, the main island.

Speaking to SNA, Francis said he wanted to create a spirit that reflected the island lifestyle and its rich history.

“Rum has always been associated with islands and Levasseur Rum personifies the exotic history of Seychelles and shares the same enigmatic aura of the pirate himself and the mystery around his buried treasure. That’s why on the box you will see his famous quote before he was hanged, which is ‘Find my treasure the one who may understand it’,” he said.

Francis sought the help of Mauritian master blender Frederic Bestel to create the spirit which he blends at his distillery, Levasseur Rum Ltd at Au Cap, on the southern part of Mahe.

“I wanted to create a brand, a spirit, that was both gourmet and elegant,” said Francis adding that the spirit will appeal to whisky enthusiasts.

“The rum is blended in antique barrel infused with authentic flavours, aromas of whisky, oak and vanilla caramel and all these flavours come to the core to give the rum a unique taste. Compared to other rums, my spirit has no added sugar and I advise my patrons to use it either neat or on ice,” Francis told SNA.

Francis also pays special attention to the packaging and branding of the product with the bottles and labels imported from Spain. The main ingredient used in the rum production is sugar cane imported from Mauritius. This is “to ensure consistency in the product as we cannot always find raw materials on the local market,” he added.

Francis is also the only one who handles the rum making and says his process is a well-guarded secret.

For local consumption, Levasseur Rum Distillery has produced the first batch of 2,000 bottles on the market since two months ago. The rum is on sale in duty free shops, hotels and restaurants and is selling at SCR550 ($40). Francis said it makes for a beautiful gift for all occasions.

Kevin Marengo, who tried the rum as soon as it arrived on the market, told SNA that product is premium quality.

“It is very different from the other rums produced both locally and internationally. It has a smooth taste and an after taste of whisky as well, which I really like. I have added Levasseur to my collection and would advise rum and whisky lovers to try it out,” said Marengo.

Francis hopes to sell Levasseur rum around the world and has partnered with renowned French company DUGAS, which is producing and distributing Levasseur Rum on the European market.