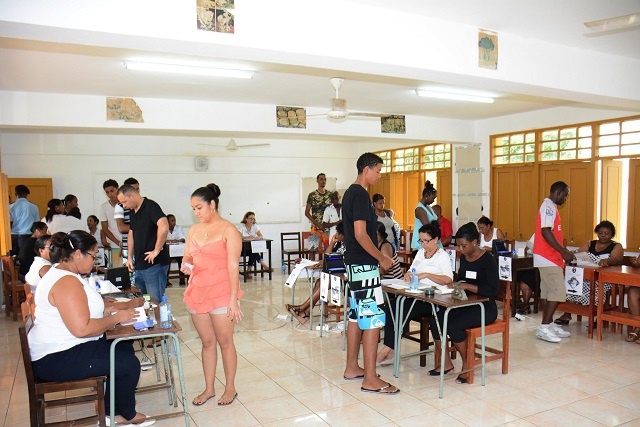 Electorates casting their votes in parliamentary elections in 2016. (Patrick Joubert)

(Seychelles News Agency) - Citizens of Seychelles are expected to have the power to push for a referendum by means of a petition, which is the subject of a bill submitted to the National Assembly, a top government official said on Monday.

Attorney General Frank Ally told reporters that the petition would only be legitimate if it is signed by more than 35 percent of registered voters.

“To hold the referendum is a different scenario. It will then be upon the President to decide if the issue is really of national importance to deserve a referendum,” said Ally.

The move to come up with legislation comes after the Seychelles’ President Danny Faure withdrew his letter to the Electoral Commission asking it to organise a referendum for voters to decide if non-residents can vote in elections.

Seychelles had a constitutional referendum in 1993 following the amendment of the constitution in 1992 when multiparty democracy was reintroduced. The 1993 Constitution does not allow a Seychellois living abroad to vote in presidential or legislative elections nor in a referendum. A citizen living abroad must reside in a local electoral area for at least three months to able to vote.

Following mixed responses, the President directed the Attorney General to prepare and draft clear and unambiguous legislation relating to the holding of referenda in Seychelles

“Divergent views and opinions have recently been expressed on whether or not the president under the existing constitutional and legal provisions can refer an issue that the president considers of significant national importance or interest for determination at a referendum. Therefore this bill will address all that,” said Ally.

The legislature will also clear the existing gap in the law governing referendum and in the manner it is conducted, said Ally.

According to the new proposed bill a referendum shall not be held when the National Assembly is dissolved during the campaign for a presidential or a national assembly election.

Nor shall a referendum be held during a state of emergency, the removal of the president, vice-president, minister or any other person appointed or elected under the Constitution; treaties, agreements or conventions in respect of international relations and any matter that will compromise public order, defence or security of Seychelles.

The legislature also makes provisions for penalties to be given in any case of false or misleading declaration.

“A person who knowingly makes a false or misleading declaration in a petition under this section, commits an offence and is liable on conviction, to a fine not exceeding SCR 100,000 ($7,300) or to imprisonment for a term not exceeding 2 years or to both a fine and imprisonment,” said Ally.