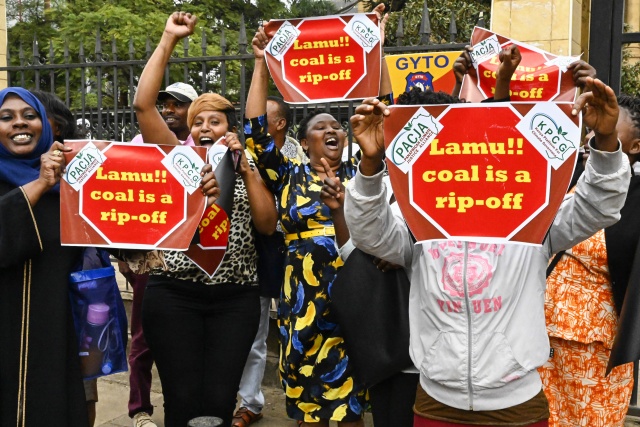 Kenya environmental activists celebrate outside the Supreme court building in Nairobi, on June 26, 2019 after the Kenya's National Environmental Tribunal blocked the construction of a coal-fired power station. The fossil-fuel project -- the first of its kind in East Africa -- has outraged activists, who say clean renewable sources are becoming ever cheaper and note that Kenya already derives much of its energy from hydro and thermal. (SIMON MAINA / AFP)

(AFP) - Kenya's environment court blocked recently the construction of a coal-fired power station on the country's idyllic Indian Ocean coast, in a move hailed as a major victory by campaigners fighting a years-long battle against the scheme.

The fossil-fuel project -- the first of its kind in East Africa -- has outraged activists, who say clean renewable sources are becoming ever cheaper and note that Kenya already derives much of its energy from hydro and thermal.

The government argues the $2-billion (1.7-billion-euro)initiative, a Chinese-financed venture between a Kenyan firm and Oman's Gulf Energy, will help secure energy needs, spur growth and create jobs in one of Kenya's least developed areas.

But the location is the pristine Lamu archipelago, which boasts a UNESCO World Heritage Site and vibrant marine life and lives off fishing and tourism -- both industries that locals say will be devastated.

Kenya's National Environmental Tribunal ruled in favour of activists who said there had been insufficient public participation in the awarding of a licence to build the plant.

He ordered them to carry out a fresh environmental impact assessment if they wished to continue the project. The company was given 30 days in which to appeal.

Activists cheered and embraced outside the court.

According to research by Greenpeace, emissions from the 981-megawatt plant would increase air pollution and cause acid rain, while a cooling system which pumps warmed water back into the ocean could threaten marine life and coral reefs.

Carbon dioxide emissions from coal-fired plants are also a major contribution to global warming -- the driver of dangerous climate change.

In a statement reacting to the ruling, Amu Power "took note of concerns ... and is committed to work with all stakeholders involved to ensure that all matters are addressed in totality."

The government has repeatedly defended the project, saying it would use the latest technology, supplied by General Electric.

"The people who are talking about coal should know there is clean coal nowadays, it is like nuclear, technology has really improved and if you see America changing their policy, they are going into coal," Energy Minister Charles Keter argued before the ruling.

"(US President) Donald Trump is now on the coal."

US Ambassador Kyle McCarter came under fire from Kenyans for backing the plant on Twitter, and criticising local activists as "highly-paid protesters".

Experts have raised issues with the project on economic grounds.

A report by the US-based Institute for Energy Economics and Financial Analysis said this month that Kenya's energy demand growth had been much lower than estimated, due to lower-than-expected growth.

The government's own 2017-2037 power development plan warns that if moderate growth continues on current trends, the plant will be "grossly underutilised".

The coal plant is meant to be a part of a mega-project which includes the construction of a port in Lamu, as well as highways and oil pipelines linked to landlocked South Sudan and Ethiopia.

The ambitious project is called Lamu Port, South Sudan, Ethiopia Transport Corridor (LAPSSET), and construction is well underway, with one of the first berths of the port nearly completed.

The project has already had a severe impact on the environment, with dredging covering a key coral reef with silt and devastating a popular fishing spot.

In 2018 a court ordered the government to pay more than 4,500 fishermen compensation of $18 million over this project, a decision now under appeal.