US Ambassador wants to see increased private-sector investment in Seychelles 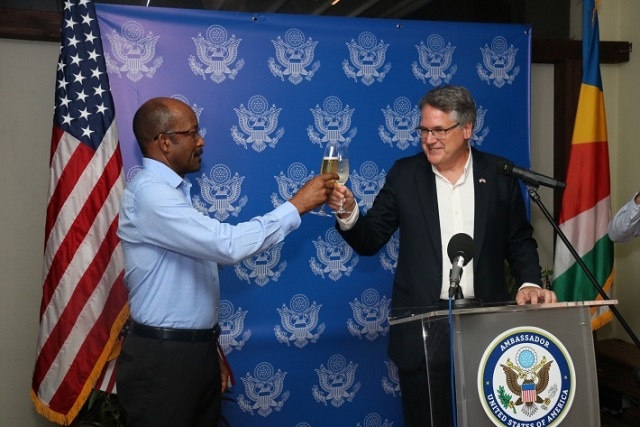 Reimer in a toast with Seychelles' Vice President Vincent Meriton at the ceremony on the occasion of the 243rd anniversary of the Independence of the USA. (Seychelles Nation)

(Seychelles News Agency) - The United States would like to increase investment in Seychelles led by the private sector, American Ambassador David Reimer said Monday in a ceremony to mark American's Independence Day, July 4.

Reimer hosted a brief ceremony at the Hilton Seychelles Northolme Resort & Spa on the occasion of the 243rd anniversary of the Independence of the United States of America.

Seychelles and the United States have a long history of cooperation. Since Reimer’s accreditation in February last year, the cooperation and assistance of the U.S have focused on maritime security, good governance and strong institutions.

“The relationship between the U.S and Seychelles is good and getting better. We have increased the amount of activity we have in Seychelles and have increased collaboration in areas of maritime security,” said Reimer.

With trade linked so closely to maritime security, the U.S Navy did a training with the Seychelles Ports Authority and key partners last week which Reimer said “was a very important step to ensure Seychelles meets the International Port Security System (ISPS).

The four-day session is in line with the U.S. government’s continued effort to advise and assist SPA with its port security programme.

“A team from the U.S Coast Guard will be revisiting the ports in the coming months to verify that the ISPS standards have been implemented properly,” the ambassador added.

When it comes to investment in Seychelles, a new policy approved in July last year is helping create an environment that is predictable and stable for all investors in the private sector. According to the Seychelles Investment Board, there are several investment opportunities where investors can put their money ranging from the traditional sectors such as tourism and fisheries to technology and financial services.

An agreement signed with the Ministry of Finance on Monday helps the U.S in law enforcement, enabling their government to get information on U.S citizens or corporations who have money in Seychelles territory to prevent them from committing tax evasion.

Reimer said that the agreement does not call out Seychelles specifically. It is one that the U.S is making all its partner states sign and most of them have agreed already.

In spite of not having an embassy in Seychelles, the Ambassador stressed that the Embassy based in Mauritius ensures that at least one representative is present in the island nation every week.

On the question of setting up an embassy in Seychelles, Reimer said, “It is difficult to open embassies post-9/11. There are many security requirements now and the cost of constructing an embassy would mean that we have to convince our government to allocate up to $150 million just to build it.”

He said that the same applies for visa procedures as the technology required for biometric data and the staff to operate it is too high but that the embassy tries as much as possible to facilitate visa applications.

On the issue of Chagossians, Reimer said that “the U.S was disappointed that Mauritius took this case to the Chief Justice, who ruled in favour of Mauritius. We believe this issue should be resolved between the United Kingdom and Mauritius.”

The same applies for the issue of a base for the coast guard on Assumption island.

“This is not an issue for us because India is only aiding in setting it up jointly with the Seychelles government,” said Reimer.

This is Ambassador Reimer’s seventh visit to Seychelles, a group of 115 islands in the western Indian Ocean, since being appointed in February last year.