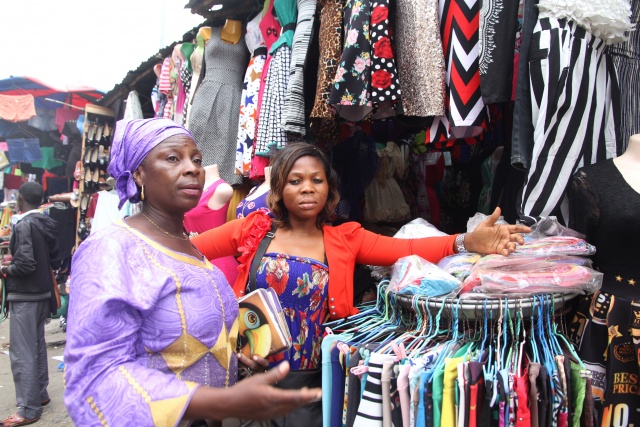 A fabric vendor attends to a client at the Seme-Podji market, the border town between Benin and Nigeria, on August 2, 2016. Benin President Patrick Talon on Tuesday confessed that the downturn in the Nigeria's economy is adversely affecting his country and other African countries following the fall in oil prices in the international market. Talon, who is on a one-day state visit to Nigeria spoke after a meeting with President Mohammadu Buhari at the presidency in Abuja. (YANICK FOLLY / AFP)

"Nigeria will sign the #AfCFTA Agreement at the upcoming Extraordinary Summit of the African Union in Niamey, Niger," the presidency said in a Tweet late Tuesday.

African leaders are meeting in Niamey this weekend.

Nigeria had been a key backer of the plan to progressively reduce trade barriers on the continent since talks on the African Continental Free Trade Area got underway in 2002.

However it abruptly changed course shortly before the deal was signed last year following pressure from local unions and businesses fearful that they would be uncompetitive if trade barriers are dropped.

The trade deal "provides immense opportunities for Nigeria's manufacturing and service companies to expand to Africa," the panel's chair, Desmond Guobadia, said in a statement after submitting its report.

AfCFTA formally came into force at the end of May, after the required minimum of 22 countries ratified the ambitious plan to boost intra-African trade, which has long suffered by high tariffs.

It hopes the progressive elimination of tariffs will help boost regional trade by 60 percent within three years. At present, only 16 percent of trade by African nations is with continental neighbours.

Nigeria is one of only three of the AU's 55 member states to not have signed up to AfCFTA, with other African economic heavyweights such as Egypt, Ethiopia, Kenya, and South Africa having ratified the pact.