China and Britain wage war of words over Hong Kong 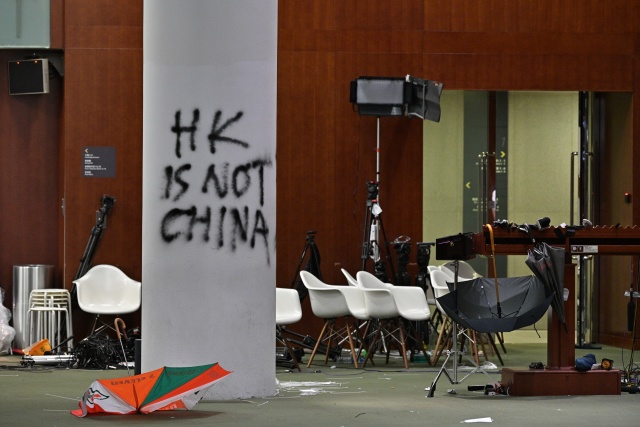 Graffiti and umbrellas are seen outside the main chamber of the Legislative Council during a media tour in Hong Kong on July 3, 2019, two days after protesters broke into the complex. Hong Kong authorities on July 3 vowed to hunt down the protesters who ransacked parliament in an unprecedented challenge to the Beijing-backed government, as the city grapples with its biggest political crisis in decades. (Anthony WALLACE / AFP)

(AFP) - London summoned Beijing's ambassador for a dressing down Wednesday in a rapidly escalating diplomatic feud over protests in Hong Kong as China told Britain to keep its "hands off" the city and "show respect".

The demonstrations sweeping the former British colony have also revived tensions inherent in the two sides' historic agreement on the global financial hub's handover to Chinese rule 22 years ago.

Hong Kong enjoys broad freedoms and rights not seen in mainland China under a doctrine known as "one country, two systems".

But fears and frustrations over Beijing's gradual tightening of those liberties has spilled over into mass demonstrations against a now-stalled draft law on extradition from Hong Kong to China.

On Monday, groups of mostly young, hardline protesters stormed and ransacked Hong Kong's legislature, daubing it with graffiti such as "HK is not China".

British Foreign Secretary Jeremy Hunt -- one of two candidates to become Britain's next prime minister -- on Wednesday took the global lead in condemning China's handling of its "special administrative region".

Hunt called on Beijing not to use the protests as a "pretext for repressions" and warned of "serious consequences" if China breaches the commitments it made to London decades ago under the terms of the handover.

His comments provoked a cascade of condemnations from China that began with its foreign ministry in Beijing and continued with its embassy in London.

"He seems to be fantasising in the faded glory of British colonialism and in the bad habit of gesticulating while looking down on other countries' affairs," Chinese foreign ministry spokesman Geng Shuang told a regular briefing in Beijing.

"I need to re-emphasise that Hong Kong has now returned to its motherland."

"I tell them: hands off Hong Kong and show respect," Liu said, according to the state-owned CGTN news site.

"This colonial mindset is still haunting the minds of some officials or politicians."

He spoke moments before being summoned by the Foreign Office for a private meeting with UK diplomatic service chief Simon McDonald.

Liu was informed "that the comments made on UK policy towards Hong Kong by the Chinese ministry of foreign affairs spokesperson were unacceptable and inaccurate," a UK Foreign Office spokesman told AFP.

The sides' relations are turning into a hot-button issue in London because of Britain's impending exit from the European Union and the imminent adoption of 5G technology.

Brexit is forcing Britain to seek closer trade relations with the United States and the booming economies of Asia.

And China's controversy-hit Huawei telecoms giant has assumed the global lead in rolling out the next-generation mobile network that should serve as a gateway to the "internet of things".

Britain has been under pressure from the United States to drop Huawei from its plans over national security concerns -- and from China about the consequences to trade if it does.

Hunt appeared to try to both soften his earlier comments and reassert his leadership credentials in a television interview broadcast late on Wednesday.

"I've been very reasonable with the Chinese. I'm someone who believes we should be the best of friends with China, I want us to trade with China," Hunt told Channel 4 News.

"I want us to have the best possible understanding between two of the great countries in the world."

Hunt has been playing up his diplomatic and business credentials in the two-man race with former London mayor Boris Johnson to succeed Prime Minister Theresa May at the end of the month.

He has portrayed himself as an experienced one-time entrepreneur who knows how to reach agreements on prickly issues while securing Britain's interests abroad.

Johnson told a campaign event on Wednesday that he backs the Hong Kong protesters "every inch of the way".