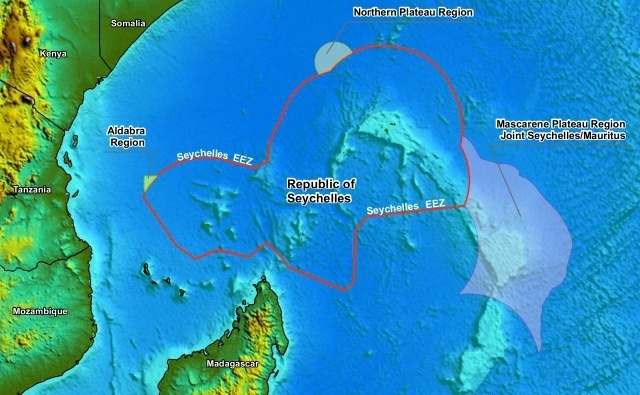 The Joint Management Area is the mechanism of joint jurisdiction between Seychelles and Mauritius over an area of the seabed and its underlying sub-soil in the Mascarene Plateau Region. (Seychelles News Agency)

(Seychelles News Agency) - Seychelles and Mauritius are discussing how to incorporate a new fiscal and taxation regime for the Mascarene Plateau, an underwater plateau managed by both countries.

The discussion is being done in a five-day meeting taking place at the Coral Strand hotel in the northern Mahe district of Beau Vallon this week to review progress made on the framework to sustainably develop the Joint Management Area.

Philippe Michaud, the special advisor in the Department of the Blue Economy, told SNA that both parties have already agreed on the taxation code, but further discussions need to be done on how to incorporate it as the two jurisdictions have different laws.

Michaud said that the revenue collected will be equally shared.

The Joint Management Area is the mechanism of joint jurisdiction between Seychelles and Mauritius over an area of the seabed and its underlying sub-soil in the Mascarene Plateau Region. It excludes the water and living organisms above the shelf.

A treaty was signed in 2012 and the two island nations secured rights to additional seabed covering over 400,000 square kilometres in the Indian Ocean.

The meeting also touched upon the different researches that are being or will be held in that area.

“We need to discuss things such as which Seychellois and Mauritian participants will be present on the research boat. We are discussing what we are going to do with the different information gathered after different research,” said Michaud.

Last year, research was carried out within the Joint Management Area by Dr. Fridtjof Nansen, a vessel equipped for advanced and multidisciplinary marine research owned by the Norwegian Organisation for Development Cooperation (NORAD).

Nansen was conducting scientific research on marine life, oceanography and pollution. Four Seychellois and one expatriate working in Seychelles were onboard the vessel for the six-week expedition.

“The information on the research conducted on this oceanic area is still being put together,” said Michaud.

Another point raised in the meeting centred on an agreement to carry out a seismic survey signed with Spectrum Geo, a United Kingdom-based company.

‘We have experienced a little delay on this research and we have discussed the next strategy we are going to take to move forward,” said Michaud.

Data collected from the survey will give an insight into the oil and gas prospectively of the area. It will be sold to companies involved in oil exploration.

The legal and, administrative issues, as well as the action plan for the operationalisation of the strategic plan, was also a point of discussion during the meeting.

“With regards to the law that is being designed to govern the area there are some technicalities that need to be sorted out,” said Michaud.

The discussions on the Mascarene Plateau started in 2002. Mauritius and Seychelles, an archipelago in the western Indian Ocean, have met 23 times for joint management discussions.