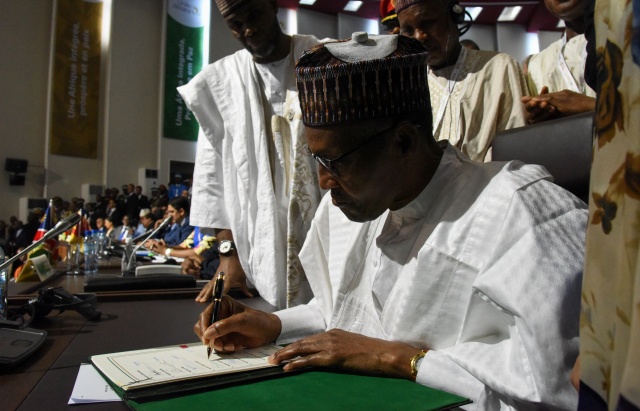 Nigerian president Muhammadu Buhari (C) signs a landmark free trade agreement ahead of the African Union summit at the palais des Congres in Niamey, on July 7, 2019. The African Continental Free Trade Area (AfCFTA) is expected to be officially launched later on July 7, 2019 in what AU commission chairman Moussa Faki said would be a "historic" moment. (ISSOUF SANOGO / AFP)

(AFP) - The United Nations on Monday hailed a landmark Africa-wide free trade area accord launched at the weekend as a bridge towards peace on the continent.

The long sought-after zone, which African leaders hope will become the world's largest free trade zone by cutting trade tariffs and barriers between 1.2 billion people, was officially launched with much fanfare at an African Union (AU) summit on Sunday.

"We have to find an alternative for the huge cohort of young people that we have the most of, who are the poor, the low-skilled. We owe them that," she told AFP at the summit in Niger's capital Niamey.

She added that the first continent-wide trade agreement, which was sealed after 17 years of tough negotiations, showed a region "on the move".

"I think what's really important now is to get that bridge from what we say to what we do," she said.

At the two-day summit, African nations agreed to shared "rules of origin, the monitoring and elimination of non-tariff barriers, a unified digital payments system and an African trade observatory dashboard", the AU commission said.

Nations committed to reduce tariffs on 90 percent of good and services, in an agreement that the AU estimates will give a 60-percent boost in intra-African trade by 2022.

African countries currently trade only about 16 percent of their goods and services among one another, compared to 65 percent with European countries.

State trade ministers have agreed the zone should be operational from July 2020.

At the summit, host Niger and its fellow members in the G5-Sahel security pact -- Chad, Mali, Burkina Faso and Mauritania -- sought support for activating Chapter VII of the UN Charter to address rising threats from terror groups.

The move would help finance the G5-Sahel force, which is currently struggling to cope with jihadists in the region.

"They have to keep asking, it's a legitimate request," Mohammed said, adding that it "urgent" to end insecurity.

She said the trade agreement was also an important step towards reducing the lure of emerging terror groups for the young.

Terrorism "is about exclusion, it is about root causes where you have young people who have no hope, where government structures are not working, where economies are not carrying people with them," she said.

Investing in opportunities for young people was "a huge task because in many cases the conflicts are moving faster than the investments were making in trying to prevent it."

She said the AU's goal of achieving peace across African by 2020 was attainable, adding that "we must work hard to silence the weapons".

Yet a broader challenge, was to "reverse" a trend of humanitarian support at the expense of rebuilding besieged communities.

"If we can put that kind of money into development you need less for humanitarian crises," she said.