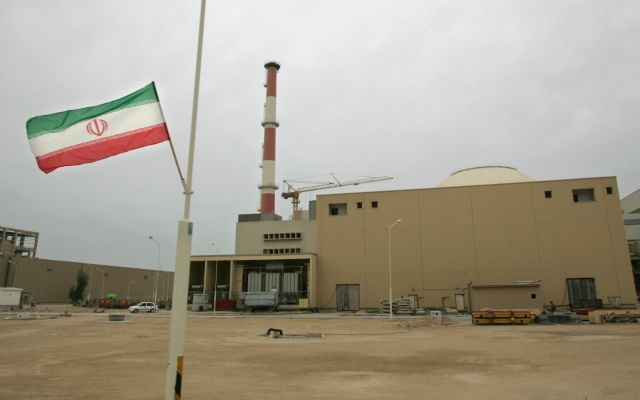 (FILES) A file photo taken on April 03, 2007 show an Iranian flag fluttering outside the building housing the reactor of the Bushehr nuclear power plant in the Iranian port town of Bushehr, 1200 kms south of Tehran. Attention is once again focused on how close Iran could be to a nuclear weapon, after Tehran said on July 7, 2019 it had started enriching uranium to a higher level than agreed in a 2015 nuclear deal abandoned by the US. Iranian officials have hinted they may go up to five percent, the level needed to produce fuel for Iran's only nuclear power station at Bushehr. (Behrouz MEHRI / AFP)

(AFP) - The European signatories to the Iran nuclear deal, along with the EU's diplomatic chief, on Tuesday urged Tehran to reverse breaches of the accord, as tensions over it grow.

A day after UN inspectors confirmed Iran had exceeded a uranium enrichment cap set by the 2015 deal and with a top French official due in Tehran for talks, the foreign ministers of Britain, France and Germany voiced "deep concern" about the growing crisis.

The EU has tried desperately but largely fruitlessly to save the deal, which curbed Iran's nuclear ambitions in return for sanctions relief, since President Donald Trump abruptly pulled the US out of it last year and imposed swingeing penalties on the Islamic republic.

"The foreign ministers of France, Germany, and the United Kingdom and the (EU) High Representative express deep concern that Iran is pursuing activities inconsistent with its commitments under the Joint Comprehensive Plan of Action (JCPoA)," they said in a statement, using the nuclear deal's official name.

"It must act accordingly by reversing these activities and returning to full JCPoA compliance without delay."

The statement said a meeting of the JCPOA's overseeing joint commission -- made up of the remaining signatories -- should be called "urgently".

Iran's move on enrichment came more than a year after Washington pulled out. Tehran is trying to up the pressure on European countries to help it keep trading despite the crippling US sanctions.

As well as increasing enrichment, Iran has also exceeded a 300-kilogramme limit on enriched uranium reserves, according to the UN atomic watchdog, the IAEA, which has scheduled a special meeting on the issue on Wednesday.

Iran says it is not violating the deal, citing terms of the agreement allowing one side to temporarily abandon some of commitments if it deems the other side is not respecting its part of the accord.