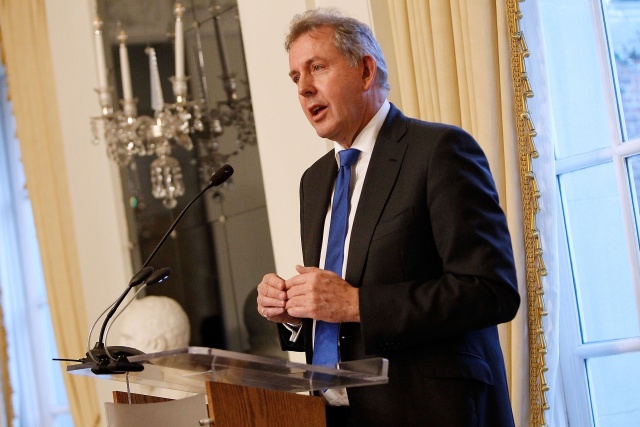 (FILES) In this file photo taken on January 18, 2017 British Ambassador Kim Darroch speaks at an Afternoon Tea hosted by the British Embassy to mark the U.S. Presidential Inauguration at The British Embassy in Washington, DC. US President Donald Trump hit back on Sunday July 7 and the UK launched an inquiry after leaked memos revealed Britain's ambassador in the US had described the president and his White House as "inept" and "uniquely dysfunctional". (Paul Morigi / GETTY IMAGES NORTH AMERICA / AFP)

(AFP) - Donald Trump's refusal to deal with the UK ambassador following the leak of his frank assessment of the US president's chaotic rule raises a big question: can the allies' much-vaunted "special relationship" survive?

Darroch had called Trump "inept" and his administration "uniquely dysfunctional".

Trump tweeted back Monday that Darroch "is not liked or well thought of within the U.S. We will no longer deal with him." He also welcomed the "good news" that Prime Minister Theresa May was stepping down in two weeks.

He followed that up on Tuesday by calling "wacky Ambassador" Darroch "a very stupid guy".

All of which creates another headache for UK politicians during a tumultuous stretch in which they must decide how -- or even if -- Britain will leave the EU as scheduled on October 31.

The hunt is on for the culprit and the "whodunnit" theories are flying.

One popular theory says the leak was meant to punish both Darroch and the politician tipped to replace him for allegedly failing to embrace Brexit in full.

This would suggest that the culprit was trying to make sure Johnson -- seemingly assured of May's office -- picks someone who shares Trump's far more sceptical view of the EU.

But the leak has also damaged Britain's foreign standing and some talk is focused on how much an old rival like Russian President Vladimir Putin stands to gain.

"Of course it would be massively concerning if it was the act of a foreign, hostile state," Hunt told The Sun.

- Can the ambassador stay? -

UK politicians of all stripes have bristled at the thought of Trump simply shoving their man out of Washington.

Whether Darroch can still perform his duties depends on what Trump actually meant in his tweets.

Darroch has already been taken off one White House dinner guest list.

But the UK envoy will be more concerned about maintaining his private contacts and talking to people in Trump's inner sanctum.

If Trump means "the whole White House staff is closed to you, including the national security adviser, that would be much more serious," Britain's former US envoy Christopher Meyer said.

UK diplomats worry that the publication of what Downing Street described as Darroch's "unvarnished" views will put off others from reporting similarly delicate matters.

"The damage is to the confidence of civil servants to put their frank thoughts to ministers," former Foreign Office number two Peter Ricketts wrote in The Guardian.

Ricketts also expressed concern that "Britain's reputation as a country that knows how to keep its secrets" might suffer.

Hunt agreed that it was "very important" that UK ambassadors all over "continue to give us their frank assessments".

The scandal piles on the pressure for the next UK leader to either bow to Trump's pressure or stick by London's envoy.

"Removing Darroch swiftly from office would be seen as a humiliating cave-in to a bullying foreign power," the Politico news site wrote.

"But voicing support for the beleaguered ambassador risks damaging relations with Trump from the outset."

The choice is made all the more important by the next ambassador's role in negotiating a new US trade agreement that can mitigate the potential damage of Britain's split from the EU.

- Will the 'special relationship' last? -

The "special relationship" term has always been more widely used in London than in Washington.

The United States also enjoyed "special" ties with countries such as Israel and neighbouring Canada.

But London provides Washington with a vital and reliable European ally that has been by its side through two world wars.

The two provide each other with intelligence and share the same global security vision that has spanned decades and which is almost certain to last.

"The relationship with Washington is based on strong and deep shared interests," Ricketts wrote.

"Those are unchanged by the leaks."

General » Be a reporter: Write and send your article » Subscribe for news alert
Tags: Britain, US, diplomacy, Trump