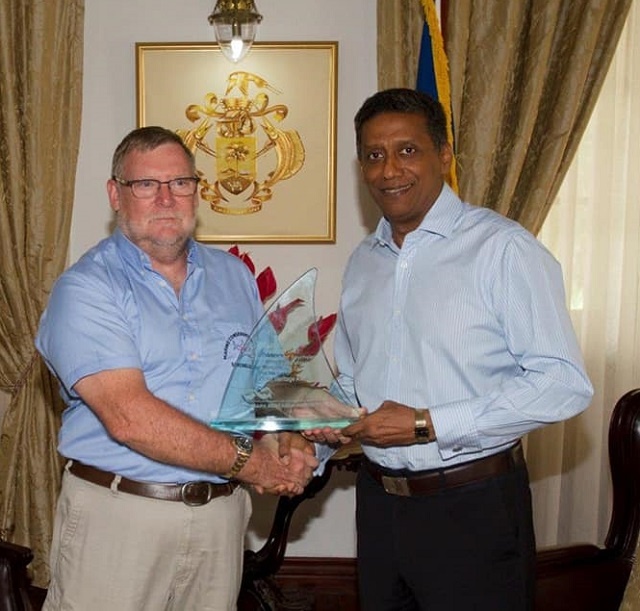 The award was presented to Faure by the chairperson of the Marine Conservation Society Seychelles (MCSS) and local representative of Shark Research Institute, David Rowat, at State House on Tuesday. (State House/Facebook)

(Seychelles News Agency) - The Seychelles’ President Danny Faure has received the Ocean Heritage Award from the Shark Research Institute based in the United States in recognition of the protection of the island nation's marine territory.

The award was formally presented to Faure by the chairperson of the Marine Conservation Society Seychelles (MCSS) and local representative of Shark Research Institute, David Rowat, at State House on Tuesday.

Faure received the award in recognition of the marine protection of 30 percent of Seychelles' Economic Exclusive Zone (EEZ) and his global advocacy for the ocean and environment conservation.

“I am honoured to receive this award on behalf of the government, and I dedicate it to the people of Seychelles," Faure said, according to the news release. "As a Small Island Developing State being affected by climate change, it is crucial that we work collectively to safeguard our future generations.”

Faure also expressed his appreciation to the Shark Research Institute for the award and commended Rowat and his team for the amazing work being done in environment conservation by both MCSS and the Institute.

The Ocean Heritage Award is only given to heads of states who have truly made outstanding contributions to the health of the ocean, for their work in protecting sharks and the marine habitat and in the hope that their leadership encourages other nations to follow suit.

There have been only two previous recipients of the Shark Research Institute’s Ocean Heritage Award. The first one was awarded in 2008, to Gloria Macapagal-Arroyo, President of the Philippines, in recognition of her decades of efforts to protect sharks and the ocean ecosystem. The second one in 2010 went to Johnson Toribiong, President of Palau, for designating the entire 237,000 square miles of the EEZ of Palau as the world’s first shark sanctuary.

When presenting the award, Rowat said, “There are not many world leaders who have been the recipient of this award. I think the award is very important for Seychelles as it reflects what were are doing is having an impact globally.”

Rowat told reporters that the meeting with Faure was very good and that “the president enjoys the marine environment. He has always been very opened and honest about these things.”

Following the presentation, Rowat briefed the president on some of the ongoing environment conservation projects being undertaken by MCSS.

The award comes a month after Faure and former President James Michel received the Planetary and Leadership Award at the National Geographic Awards ceremony at the George Washington University, in Washington D.C.