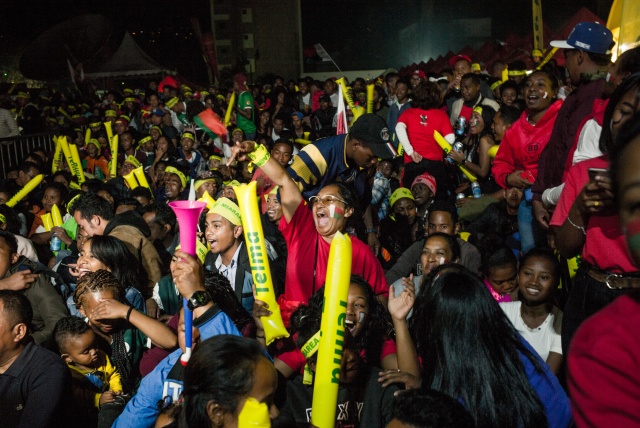 Fans of "Barea", Madagascar's national football team celebrate during the match against the Democratic Republic of Congo on July 7, 2019 in Antananarivo.
(RIJASOLO / AFP)

(AFP) - Before the Africa Cup of Nations kicked off in Egypt last month, Madagascar were best known for the tongue-twisting surnames of players such as Anicet Andrianantenaina and Charles Andriamahitsinoro.

Now, 20 days into the biennial tournament, the Indian Ocean islanders have stunned three-time champions Nigeria and are preparing to face Tunisia on Thursday in the last quarter-final.

While France-born coach Nicolas Dupuis insists "the team is the star", midfielder Andrianantenaina and forward Andriamahitsinoro have caught the eye.

Bulgaria-based Andrianantenaina was among the 11 footballers chosen by a Confederation of African Football (CAF) panel as the best in the 36-match group phase.

Andriamahitsinoro, who plays for a Saudi Arabian club, made the substitutes' list in the group 'dream team', and his two goals have put him in contention for the Golden Boot award.

"The coach is correct to say the team is the star and, sometimes, an individual will stand out when we need him to. That is our strength," explained Andriamahitsinoro.

He stands out on the field because he has blond dyed hair and is tall in a squad of mostly medium-height footballers.

Tunisia coach Alain Giresse says his first target of a last-eight place has been achieved, adding: "We are capable of lifting the trophy 15 years after doing so for the first time."

The countries have met competitively only twice with Tunisia winning 1-0 at home and 2-0 away in 2002 World Cup qualifying.

Since then, Tunisia hosted and won a Cup of Nations while Madagascar became so weak that the Democratic Republic of Congo went to Antananarivo three years ago and won a qualifier 6-1.

But while unimpressive Tunisia reached the quarter-finals with four straight draws -- a penalty shootout win over Ghana was officially classified as a draw -- Madagascar blossomed.

Should Madagascar eliminate vastly more experienced Tunisia, they will become the first Cup of Nations debutants since South Africa in 1996 to reach the semi-finals.

This clash extends one of the great rivalries in the tournament with the Ivorian Elephants winning three and the Algerian Desert Foxes two of seven previous meetings.

When they last met, in a 2015 quarter-final, Ivory Coast triumphed 3-1 with Serey Die part of the winning team while the losing line-up included Riyad Mahrez.

The midfielders, who have contrasting roles with Die primarily a destroyer and Mahrez a creator, captain the teams in Suez four years later.

Algeria coach Djamel Belmadi believes his team, the only survivors with a 100 percent record in Egypt, can go all the way, saying: "It does not cost anything to be ambitious."

Rival coach Ibrahim Kamara is saying little during this Cup of Nations while a side boasting star attackers like Nicolas Pepe, Jonathan Kodjia and Wilfried Zaha has yet to sparkle.