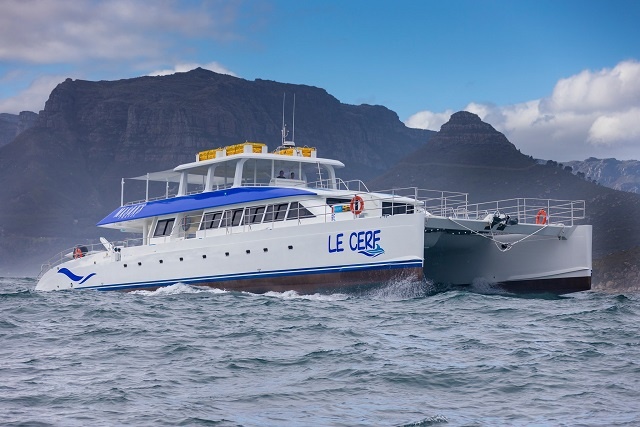 Expected to arrive in the country in mid-July, the catamaran will have a capacity to accommodate 240 passengers for cocktail style arrangements. (Masons Travel)

Expected to arrive in the country in mid-July, the catamaran will have a capacity to accommodate 240 passengers for cocktail style arrangements, said the public relations manager at Mason’s Travel, Nicole St Ange.

“This makes for a great option for festive season gatherings and private events. For a while now, Anahita has been our flagship because she takes about 100 passengers and goes out monthly for our sunset cruise, which mainly targets the local crowd,” said St Ange.

Dubbed Le Cerf, the catamaran was named after one of the company’s first vessels, which began excursions in 1972 with a reef safari to the Ste Anne Marine Park. Despite not having much resemblance to the old vessel, Le Cerf will be carrying out similar functions as we cater to the many guests visiting Seychelles.

“Travellers to Seychelles are always astounded by the different perspective of the islands that can only be experienced from the sea. That same idea holds true 47 years later and we’re delighted that Le Cerf will allow today’s holidaymakers that same special experience with an added level of comfort, service and convenience,” she said.

Tourism is the main economic pillar of Seychelles -- a 115-island archipelago in the western Indian Ocean. From the start of the year to June 30, Seychelles has welcomed 187,108 visitors which represents an eight percent increase as compared to the same period last year.

The public relations manager told SNA that with the continuously increasing number in tourist arrivals, there is a market for Le Cerf, and the company is doing its best to accommodate for it.

St Ange added that Mason’s Travel handles a lot of cruise ships that dock into Port Victoria and “a boat of this capacity allows us more flexibility in catering for large groups.”

The cruise ship season starts in October through to March or April. The cruise ships dock in Seychelles for two or three days and want to have a selection of excursions to offer to their clients.

“Although we only cater for a portion of the cruise trip travellers, as many opt to discover the islands on their own, we must be equipped to handle large requests,” said St Ange.

At the moment, Mason’s Travel has three catamarans in its fleet.

“We have Anahita that is based on Mahe that does the reef safari in the marine park and the infamous sunset cruise. Then we have Catalina on Praslin which has a slightly lower capacity catering for excursions such as Cousin, Curieuse, St Pierre. There is also Indiana which has a 30 Pax capacity and it is also based on Mahe and that is mainly for private charters for those seeking a more intimate, tailor-made outing,” said St Ange.