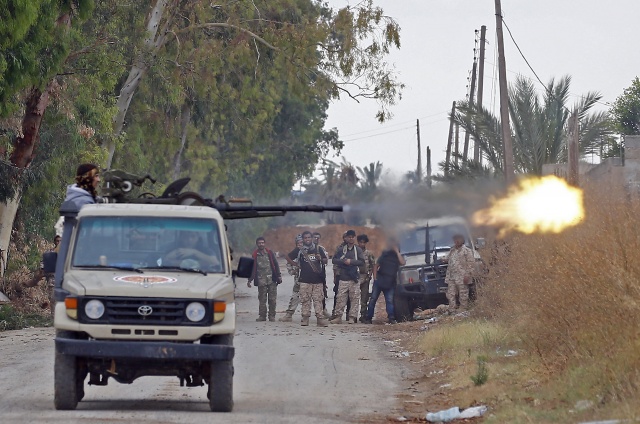 A fighter loyal to the Libyan internationally-recognised Government of National Accord (GNA) fires a heavy machine gun during clashes against forces loyal to strongman Khalifa Haftar, on June 1, 2019, in al-Sawani area, south of the Libyan capital Tripoli. (Mahmud TURKIA / AFP)

(AFP) - The African Union's High Level Committee on Libya has expressed concern at "outside interference" in the besieged country and proposed the creation of a special joint UN and AU envoy.

"The Committee expressed its deep concern over continued external interference in Libya's internal affairs, motivated by selfish interests, which continues to undermine efforts to establish a permanent and unconditional ceasefire," the Committee said in a text following a weekend AU summit in Niger, according to meeting minutes seen Wednesday by AFP.

The Committee "proposed the appointment of a Joint Special Envoy of the AU and the United Nations to strengthen the coordination of efforts between the two organisations, on the basis of a single road map", the document said.

It added the envoy would provide "unified support to Libyan peace efforts".

African delegations and media had been waiting for a statement following the weekend AU summit in the Nigerien capital Niamey.

The absence of one had been widely taken as fueling doubts the leaders would be able to agree on a unified position over the Libyan crisis.

The nomination of a joint envoy to aid UN support mission head for Libya, Ghassan Salame, had been discussed prior to the Niamey summit, a diplomatic source said.

The sources said the talks' conclusions would have to be signed off by all parties before being publicly released.