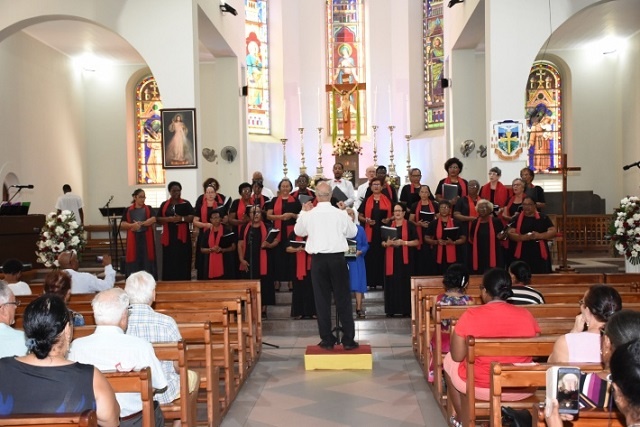 The Choral Music Society of Seychelles raised a small donation in a solidarity concert. (Seychelles Nation)

(Seychelles News Agency) - The Choral Music Society of Seychelles has raised a small donation while also giving a solidarity concert in honour of the Notre-Dame Cathedral in Paris, France.

The Mayor of Victoria, David Andre, told SNA a total of $330 was raised during the concert on Sunday. The donation will be handed over to the French Embassy to show Seychelles' solidarity towards a globally recognised religious site.

Andre explained that in July 2003 “the Choral Music Society of Seychelles had the chance to go to France, and had the privileged opportunity to perform a concert in the Notre-Dame Cathedral in Paris.”

“It was an incredible experience to have a choir from Seychelles performing in the Notre-Dame Cathedral in Paris as not many people get the chance to do so. When we learnt that the fire happened, as a symbolic gesture it was agreed that it would be a good initiative to do a concert and at the same time conduct a little fundraising,” said Andre.

After the concert on Sunday the Bishop of the Catholic Diocese of Seychelles, Denis Wiehe, told the Seychelles Nation newspaper that "it is a tradition in the church and in our society to organise such concerts.”

“I am very happy that we have been able to do something for the Notre-Dame Cathedral in Paris because it is a world heritage. It is important that the people of Seychelles, including other peoples of the world, have the opportunity to participate in this contribution," said Wiehe.

The Notre Dame Cathedral which is a landmark in the French capital, Paris, was declared a UNESCO World Heritage Site in 1991. It was badly damaged in by a fire on Maye 15. The 90-metre-high spire and parts of the roof completely collapsed. Following the fire, over $2 billion was donated towards the reconstruction of the cathedral.

The construction of the Notre-Dame Cathedral was completed in 1345. The medieval-style Catholic cathedral is consecrated to the Virgin Mary and is considered to be one of the finest examples of French Gothic architecture.

After Victor Hugo published his novel ‘The Hunchback of Notre-Dame’ in 1831, popular interest in the cathedral blossomed.