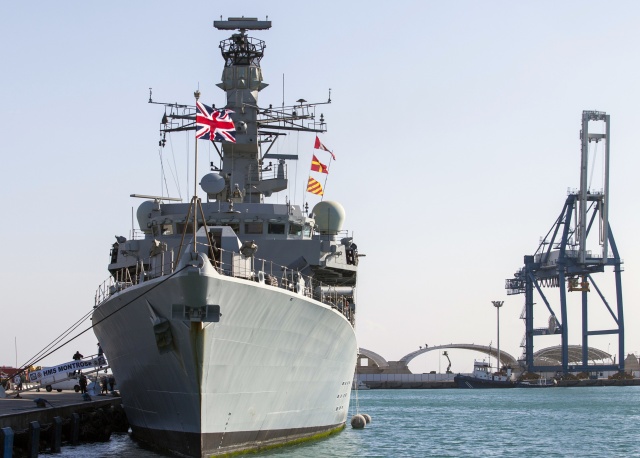 (FILES) In this file photo taken on February 03, 2014 the British warship HMS Montrose is pictured docked in the Cypriot port of Limassol. Three Iranian ships attempted to "impede the passage" of a British oil tanker in Gulf waters, forcing a UK frigate to intervene, the British government said on July 11, 2019. "Contrary to international law, three Iranian vessels attempted to impede the passage of a commercial vessel, British Heritage, through the Strait of Hormuz," a UK government statement said of the incident, which occurred yesterday. "HMS Montrose was forced to position herself between the Iranian vessels and British Heritage and issue verbal warnings to the Iranian vessels, which then turned away," the statement said. (AFP)

(AFP) - Britain said Friday it was sending a second warship to the Gulf and raising the alert level in the oil-rich region as tensions spike after Iranian gunboats threatened a UK supertanker.

The decision was disclosed as US President Donald Trump stepped up his war of words with the Islamic republic, which breached part of a nuclear accord already rejected by Washington.

"They're treading on very dangerous territory. Iran, if you're listening, you better be careful."

British officials said the naval deployment was part of a pre-planned rotation and meant to ensure a continued British naval presence in one of the most important but volatile oil shipment routes in the world.

But a source said the switchover was brought forward by several days and should see two of Britain's most advanced warships jointly navigating the waters off Iran for a period that might last a number of weeks.

A government spokesman said the HMS Duncan was "deploying to the region to ensure we maintain a continuous maritime security presence while HMS Montrose comes off task for pre-planned maintenance and crew changeover".

On Wednesday, HMS Montrose warned off three fast Iranian gunboats that UK officials said were trying to "impede" the progress of a British supertanker through the Strait of Hormuz in the Gulf.

Iranian officials have denied the incident ever happened.

The British government decided at the start of the week to raise the alert level for ships travelling through Iranian waters to three on a three-point scale, indicating a "critical" threat.

HMS Duncan is an air defence destroyer that carries a set of heavy Harpoon anti-ship missiles and has a company and crew in excess of 280.

After weeks of escalating tensions, Trump last month authorised an air strike on Iran over its downing of a US spy drone but backed away at the last minute.

Alarmed that Trump's hawkish stance could lead to war, the Democratic-led House of Representatives on Friday voted to bar funding for military operations against Iran unless they are in self-defence or explicitly authorised by Congress.

"Frankly, what it will prevent is what this president promised to the American people not to do -- to get into another endless, costly war in the Middle East," said Representative Ro Khanna, the Democrat who led the measure.

But the Senate, controlled by Trump's Republican Party, defeated a similar proposal.

Khanna's amendment was part of a broader defence bill, meaning that the two chambers will need to negotiate on the language.

Michael McCaul, the top Republican on the House Foreign Affairs Committee, called the amendment "reckless," saying that the military should not be held up by a potentially lengthy legislative process.

"This will tie our military's hands at a perilous time. We need Iran and its terrorist proxies to think twice before they attack Americans, our friends or our interests," he said.

The Strait of Hormuz episode occurred a week after UK Royal Marines helped the Gibraltar authorities detain an Iranian tanker that US officials believe was trying to deliver oil to Syria in violation of separate sets of EU and US sanctions.

Iran has bristled at the arrest and issued a series of increasingly ominous warnings to both the United States and Britain about its right to take unspecified actions in reprisal.

"If the enemy had made the smallest assessment they wouldn't have done this act," Iran's Revolutionary Guards deputy commander Ali Fadavi said on Thursday.

"We want to do everything we can to make sure that we don't have an unintended escalation which could be very dangerous for the world," Hunt said.

The authorities of Gibraltar -- a British overseas territory on Spain's southern tip -- said on Friday that the Iranian supertanker was carrying 2.1 million barrels of light crude oil.

They also insisted that they had asked British Naval Marines to help with the Iranian tanker's arrest without any outside political pressure.

The Gibraltar police on Thursday announced the arrest of the Iranian tanker's Indian captain and officer, and on Friday two more Indian crew members were detained.