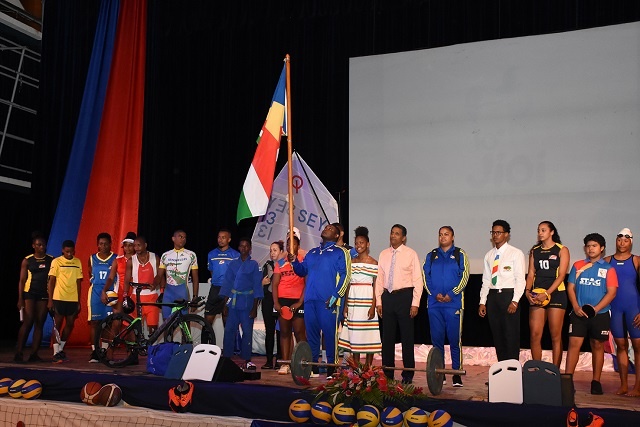 Team Seychelles will be led by boxer Keddy Agnes as the flag-bearer in the opening ceremony. (Joena Meme)

(Seychelles News Agency) - Boxer Keddy Agnes will be the flag-bearer for Seychelles at the opening ceremony of the 10th edition of the Indian Ocean Island Games which will take place in Mauritius from July 19-28.

The President of Seychelles, Danny Faure, handed the Seychelles’ flag to Agnes -- the Sportsman of the Year -- on Friday during a sending off ceremony of Team Seychelles for the competition at the International Conference Centre in the capital, Victoria.

The ceremony also featured some athletes marching in the uniform they will wear at the games.

In her address at the ceremony, the Designated Minister, Macsuzy Mondon, who is also responsible for sports, told athletes that “our wish is to see you perform exceptionally well and realise your dream. We also want you to perform well to make your families, the Seychellois nation and Seychelles proud of your achievements.”

Mondon said that in the past two years the government has invested more money in the athletes’ preparation for local, regional and international training camps.

The total cost of Seychelles' participation in the games in Mauritius amounted to more than SCR 4 million ($294,000) and Mondon said that up to now, the government has invested a total of SCR 30 million ($2.2 million) for the games.

The Seychelles’ delegation includes 228 athletes and 97 officials and the first group will leave this weekend and the largest group on Wednesday, July 17.

The Indian Ocean Island Games is a multi-sport event held every four years among athletes from Indian Ocean island nations. The Games were created by the International Olympic Committee in 1977.

As an incentive, the government of Seychelles, an archipelago in the western Indian Ocean, is increasing the financial rewards for winners of medals.

Mondon said that although money is an incentive, it not the only source of motivation.

“An athlete must concentrate on improving individual and team performance to be able to win more medals. For this to happen, they have to commit physically and mentally until the end of the games. Sometimes there can be a little disappointment but it is important to remain focus on our objectives and not let ourselves be discouraged,” she said.

Seychellois athletes are being called on to maintain a good team spirit, a high level of solidarity and to keep the flame of desire to win burning.

“This is the reason why all of Seychelles will be applauding and encouraging throughout the games because we want you to come back many medals.

In wishing all athletes success for the 10the edition of the games, Mondon recited the motto of Team Seychelles -- “Kwar e Reisir’’ (Believe and Succeed).