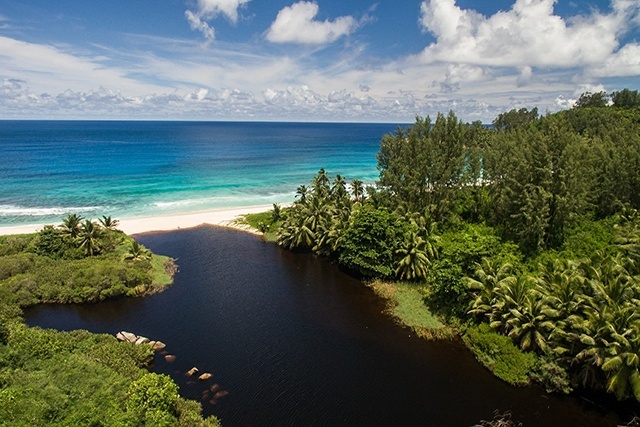 The area is home to the two species of endemic, Critically Endangered and nationally protected terrapins ‘Torti Soupap’ as well as being a potential foraging area for sheath tail bats. (Stan Adam)

(Seychelles News Agency) - Plans are underway to designate Seychelles’ Grand Police Bay in the southern side of the main island of Mahe an Area of Outstanding Natural Beauty, said an environment official.

The proposed management and business plan for the wetland area, located in Takamaka district, was presented to the public to get their views.

The meeting was spearheaded by the Ministry of Environment, Energy and Climate Change in partnership with the Marine Conservation Society Seychelles, which carried out a 12-month biodiversity assessment of the wetland area.

The proposed plan outlines actions required to develop the area in a way that will protect the natural heritage and maximise sustainable public access and enjoyment. The nominated Grand Police Area of Outstanding Natural Beauty comprises two large parcels of land - T575 and T574 - which run from the mountain top to the coast, as well as a smaller one -- T559.

The privately-owned area had initially been earmarked for a 5-star marina-resort development by its owner Loomington Investments.

However following strong public opposition and petitions by the Takamaka-based environment organisation, Grand Police Citizens Initiative, the government initiated a discussion with the owner to consider returning the land to the State, so that it can be declared a protected area.

Speaking at the meeting, the Principal Secretary for Environment, Alain Decomarmond, said the meeting was another step towards declaring the area protected.

“The environment assessment has confirmed that Grand Police Bay has rich biodiversity and we are using this to build our case for the nomination file. We need to build a strong case and justify why the whole area from the mountain to the coast should be protected,” he said.

Decomarmond added that the meeting was "to get the public’s views and their endorsement before taking the document to the Cabinet of Ministers for approval and to start the formal legal steps to have Grand Police Bay declared a protected area.”

If the Cabinet of Ministers gives its approval, the nomination file will be made public for 28 days for further considerations and comments.

“If after all these steps, the opinion is for protection then the government will engage the landowners to designate Grand Police Bay an Area of Outstanding Natural Beauty area,” said Decommarmond.

According to the environment ministry, some low-scale economic activities and tourism development can be done in an Area of Outstanding Natural Beauty, as long as it does not disturb or destroy the area’s environment.

In its assessment report, the Marine Conservation Society Seychelles (MCSS) said the area should be considered as an international key biodiversity area (KBA).

Project Leader, Rabia Somers, said the study confirmed the number of endemic, native and invaluable plants in the area.

“High up on the glacis is where there is intact natural vegetation and the wetland on the area is the last remaining intact watershed on Mahe apart from Anse Major and Morne Seychellois National Park. This is the only one that’s unprotected and that’s as extensive as it is,” said Somers.

The area is home to 61 animal species, including two endemic ones – the critically endangered and nationally protected terrapins ‘torti soupap’ as well as being a potential foraging area for sheath tail bats.

Also found in the area are 102 plant species including the lalyann zasmen and orkid pti fer payanke while the beaches are nesting areas for the green and hawksbill turtles.

The proposed management plan includes a conservation and administration centre, to help manage access to the area and prevent poaching and littering. There are also plans to build footpath networks, car parking areas, toilet and waste management facilities.

Grand Police Citizens Initiative, a local non-government organisation, which campaigned against the tourism development, said it supports the plan.

Speaking to SNA, its vice chairperson, Nanette Esparon, said she hoped the plan would be implemented as soon as possible.

“We are happy that our views have been taken into consideration and incorporated into the plan especially the accessibility bit to ensure that visitors to the area are conscious of the need to protect the Grand Police Bay. It was all worth it but now we have to wait and see when can it be implemented,” said Esparon.

The Ministry of Environment, Energy and Climate has not set a deadline for the area to be designated an Area of Outstanding Natural Beauty but says it hopes to see some progress by the end of the year.

Seychelles, a group of 115 islands in the western Indian Ocean, is home to 57 international outstanding biodiversity areas that need to be conserved.