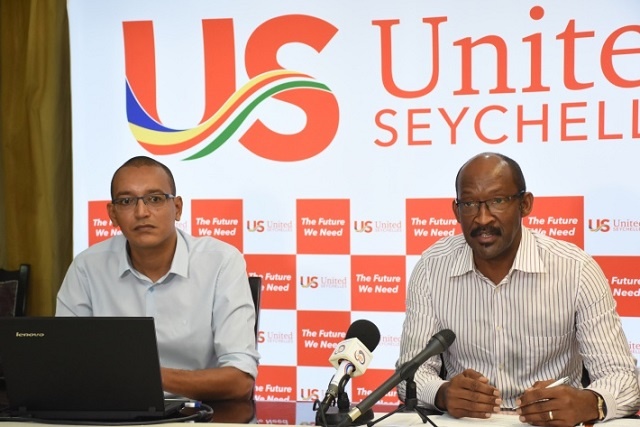 (Seychelles News Agency) - President Danny Faure is the only candidate to submit an expression of interest to be the United Seychelles party’s presidential candidate for the 2020 elections, the party’s chief executive said on Tuesday.

Andy Jean-Louis, who is also the party’s Secretary-General, told SNA that Faure submitted his application on Monday through a representative.

“The documents were hand-delivered at Maison du Peuple at 11 o’clock just one hour shy of the official deadline of midday. We can confirm that Mr Faure is the only candidate to declare his intention to stand on the party’s ticket, and his application will now be considered under the procedures established by the new Constitution of United Seychelles,” said Jean-Louis.

Faure announced his intention to stand as a candidate for United Seychelles in a special address on May 29. He was the running mate of former President James Michel, who resigned less than a year after winning the 2015 election. Faure, previously the Vice President, took over the presidency.

United Seychelles started the process to choose a candidate at the end of June and invited all party members who were interested to file an expression of interest. The potential candidates had to be endorsed by at least 100 registered members of the party.

Faure exceeded this number and had 185 endorsements and Jean-Louis said that between now and Friday the signatures will be vetted to ensure they are all legitimate.

“Apart from these two documents, Mr Faure also submitted his vision for the country in line with the party’s constitution. All of these, including his declaration of assets and liabilities, will be forwarded to the Ethics Committee on Friday for vetting,” said Jean-Louis.

He said the vetting form and declarations of assets and liabilities are very important for United Seychelles because the party wants to put forward a candidate with the highest integrity.

“President Faure may be the only party member to have come forward but this process was not about the number of candidates but rather about the standards that the party demands from those aspiring to positions of responsibility and leadership,” he said.

Once vetted and endorsed by the Ethics Committee, Faure’s application will then be brought before the Congress, the supreme organ of the party, next month,  for the final decision.

For the first time, the application process was being done using the new constitution which was adopted by the Congress last November.

For the post of vice-president, the National Executive committee will set a date for the designated candidate to choose his running mate.

The vice president will also go through the same vetting process and endorsement by the committee and the Congress. The candidate does not need the 100 signatures.

Meanwhile, the main opposition coalition, Linyon Demokratik Seselwa (LDS), which holds a majority in the country’s parliament will be announcing the process it will follow for selecting a candidate for the next year’s election on Saturday.