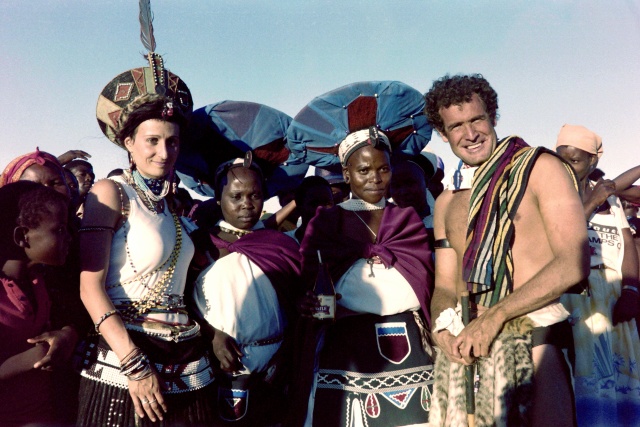 (FILES) A photo taken on March 27, 1989 shows South African singer Johnny Clegg (R) married with Jennifer Bartlett (L) in a traditional Zulu wedding on March 26, 1989 in the Natal province in South Africa. South African legendary singer Johnny Clegg, who blended Zulu rhythms with Western styles, died on July 16, 2019, after a long battle with cancer, his manager said. Clegg succumbed to pancreatic cancer at the age of 66 at his home in Johannesburg, more than four years after he was diagnosed. (Trevor SAMSON / AFP)

"Johnny passed away with his family this afternoon," manager Roddy Quinn said. "We are devastated."

Clegg succumbed to pancreatic cancer at the age of 66 at his home in Johannesburg, more than four years after he was diagnosed.

"Johnny leaves deep footprints in the hearts of every person that considers himself or herself to be an African," Quinn said.

"He showed us what it was to assimilate to and embrace other cultures without losing your identity.

"In many of us, he awakened awareness."

Nicknamed the "White Zulu", Clegg mastered the language, culture and high kicks of Zulu dance, forming multi-racial bands in defiance of the segregationist laws of the apartheid-era government which censored his work.

Among his famous tracks was "Asimbonaga", Zulu for "We have not seen him", released in 1987 following the declaration of the first state of emergency by the apartheid government.

The song paid tribute to Nelson Mandela -- then in jail -- and was outlawed because any reference to the anti-apartheid leader was illegal.

It became an international anthem for the struggle against apartheid and for modern South Africa.

Clegg was diagnosed with cancer in 2015 but continued to tour and perform around the world.

He performed for the last time in October last year in Mauritius.

The South African government and fellow musicians paid tribute to Clegg as a musician and an activist.

"A towering giant has fallen with the passing of legendary Singer-songwriter & Anthropologist Johnny Clegg," Arts and Culture Minister Nathi Mthethwa posted on Twitter.

"Our hearts are sore & as he famously sang in Asimbonanga 'oh the sea is cold & the sky is grey' as we contend with the loss of a torchbearer of our struggle for freedom."

The South African government account tweeted that Clegg "has left deep footprints in our hearts".

Veteran singer and old friend Sipho 'Hotstix' Mabuse told SABC that "this is probably one of the most sad days for this country to have lost someone like Johnny Clegg.

"Johnny was in the forefront of everything that was going right for this country," he said.

"Johnny could have been one of the most privileged people as most white people were -- but he chose to take a different direction and join in highlighting the atrocities of apartheid through his music and joined with many people involved in liberation struggle.

"Johnny took it upon himself to sing and write about Nelson Mandela when not many white people would have done that.

"His contribution was immense in profiling South Africa as a pariah state. Today we are a different country because of what people like Johnny have done."

The Soweto Gospel Choir said it was "devastated at the passing of Johnny Clegg. An music icon and a true South African. We shall miss him with all our hearts".

Clegg was born on in 1953 in Lancashire, Britain and moved to Johannesburg with his mother when he was six years old.

His exposure to Zulu migrant workers during adolescence introduced him to their culture and music, and his involvement with black musicians often saw him arrested during apartheid.

At the age of 17, together with Sipho Mchunu, he formed their first band called Juluka.

In 1986 at the height of apartheid he partnered with Dudu Zulu to form his second inter-racial band, Savuka.

He is survived by his wife of 31 years, Jenny and their two sons Jesse and Jaron.