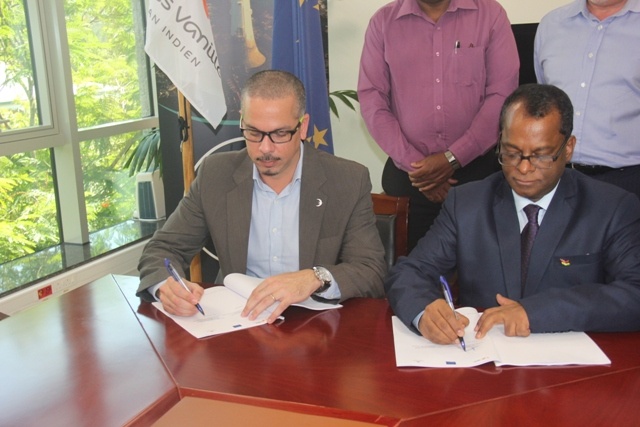 The agreement was signed on Thursday by Maistry (right) and representative of Inchcape, the contractor for the study. (Thomas Meriton)

(Seychelles News Agency) - A study on how to elevate Indian Ocean port services to the same standard was commissioned Thursday with the signing of an agreement in Seychelles, which currently holds the presidency of the Vanilla Islands group.

The chief executive of the Seychelles Ports Authority, Ronny Brutus, said that it is important that “we harmonise our infrastructure to the same standard as the cruise ship berthing our port.”

Brutus said that the “study will also help to compare the different ports in the region to bring all ports to the same standard to meet the expectation of visitors. It will help us to adopt the best practices offered by other ports.”

The study is being financed by the European Union and the Agence Française de Développement (AFD) at a cost of $360,000. The contract to conduct the study — which will last for six months during the cruise ship season — has been awarded to Inchcape, a company based in Mauritius.

The study will focus on countries that form part of the Vanilla islands, an affiliation of islands comprising of Mauritius, Madagascar, Reunion, Mayotte, and the Maldives.

A memorandum of understanding to start the project was signed on Thursday by the reprsentative of Inchcape from Mauritius and the President of the l'Association des ports des îles de l'océan Indien, Ramalingum Maistry.

In his address, Dogley, who is also the Minister of Tourism, Civil Aviation, Ports & Marine, said that the arrival of a cruise ship brings economic growth to the country, therefore, it is important to conduct an in-depth study.

“As a Small Islands Developing State, we depend heavily on tourism as our main source of income. Our port and facilities give the first impression when visitors disembark on their cruise ship, therefore we continuously need to find innovative ways to keep them satisfied, and this study will help us with that,” he said.

According to the Seychelles Ports Authorities, the cruise season of 2018/2019 has brought 46 cruise ship calls. The Seychelles’ cruise ship season lasts from October to around April.

On his side, Maistry said that it goes without saying that there is a huge potential in the Indian Ocean when it comes to cruise ships

“What is left for us to do is to find out how we can capture this traffic. This is why this study will be conducted to better understand the evolution of this sector including finding our strength and weaknesses,” said Maistry.

He added that after the study, “we will design a common action plan to develop this sector in the economic interest of the Indian Ocean islands.”

The majority of cruise ships to Seychelles dock in Port Victoria -- the main port of the island nation, which opened in 1972.  Upon arrival visitors are greeted at a special reception area, accompanied by traditional music and dances of the island.

Seychelles, a group of 115 islands in the western Indian Ocean, came out as the top sought-after destination for cruise ships in the region, winning the Indian Ocean’s Leading Cruise Destination at the World Travel Awards 2019.