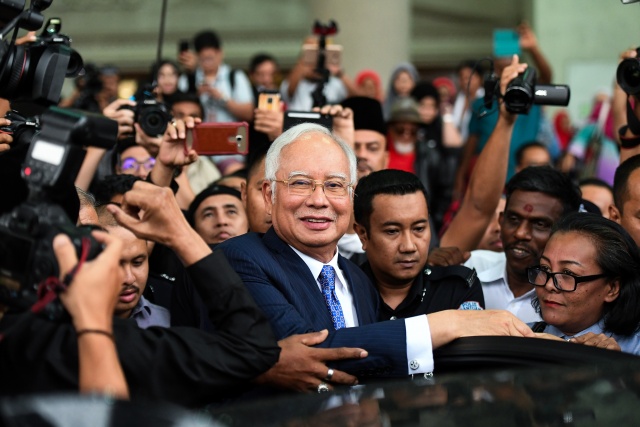 Malaysia's former prime minister Najib Razak (C) leaves a court in Kuala Lumpur on April 3, 2019, after facing his trial over alleged involvement in the looting of sovereign wealth fund 1MDB. Malaysia's disgraced former leader Najib Razak pleaded not guilty to all charges against him as he went on trial April 3 over a multi-billion-dollar fraud. (Mohd RASFAN / AFP)

(AFP) - Singapore is returning almost $40 million to Malaysia seized in connection with a massive financial scandal that played a major role in the toppling of the corruption-plagued government of Najib Razak, police said.

The city-state is one of several countries that launched probes into allegations that billions of dollars were misappropriated from Malaysian sovereign wealth fund 1MDB in an elaborate ruse that stretched from Asia to the United States.

The scandal -- allegedly involving Malaysia's ex-leader Najib, his family members and inner circle -- played a key role in the defeat of his long-ruling coalition at the polls last year.

Singapore police said their commercial affairs department had filed applications to return around Sg$50.3 million ($37 million) of seized money linked to 1MDB to Malaysia, and the courts have given their approval.

"Part of the monies have already been transferred to Malaysia, while the rest are still being processed by the banks," they said late Thursday.

Police did not say where the money was seized from.

The US Department of Justice, which has been seizing assets in the United States allegedly bought with stolen 1MDB money, believes that some $4.5 billion was plundered from the fund.

Singapore's investigations into 1MDB centred on allegations that its financial system was used to launder some of the stolen funds.

The financial hub has jailed a Swiss banker and three Singaporean private bankers for their roles in the affair.

It has closed the local branches of two Swiss banks, which were allegedly used to transfer illicit funds, for what regulators called massive lapses in financial controls.

Since his election defeat, Najib has been arrested over the scandal and went on trial in April.