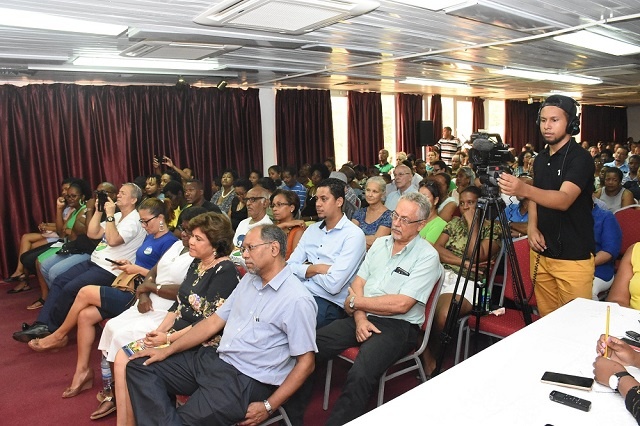 Seychelles’ main opposition coalition, Linyon Demokratik Seselwa (LDS), announced over the weekend the process it will follow for selecting a candidate for next year’s presidential election.

Any person willing to stand as a presidential candidate for LDS can submit their letter of interest. The deadline is August 31.

The party’s leader, Roger Mancienne, during a meeting for activists at the International Conference Centre in Victoria on Saturday, said that the party wanted to have a nomination process that was democratic and fair that allows every member to take part.

“We are calling on all members who believe they meet the criteria to stand as our candidate to show their interest through a letter addressed to our executive council. This process is open and transparent and means that all members have an equal chance of applying for the post to be the party’s candidate,” said Mancienne.

To date, only opposition leader Wavel Ramkalawan has announced his intention to be a candidate. He was also the presidential candidate for Seychelles National Party in 2015 when he came second in an extremely close vote won by former President James Michel, who later stepped down.

This is the first time that the opposition coalition has launched this process. In the last presidential election in 2015, the parties stood as separate entities.

In June this year, United Seychelles – the ruling party - started the process to choose a candidate and invited all party members who were interested to file an expression of interest. Last week the party announced their candidate: Danny Faure, the current president of the island nation.

LDS holds a majority in the country’s parliament.

Apart from their personal details, the letter should have a statement of qualifications and experience justifying their candidature and capability to serve as president.

It should also have the candidate’s vision for LDS, for government as well as 20 signatures of party members in support of their nomination.

The candidates are also being asked to disclose any information that may be damaging to their candidature.

Mancienne said the council will consider and vet all applications on September 5 and in the event, there is only one candidate then the person’s name will be presented at the party’s convention.

“If there is more than one candidate then at our Convention on September 15, all the applicants will get a chance to address the audience on why they are the best candidate to represent the party. Following this we will have a second meeting on October 20 where we will have a final vote”, said Mancienne.

He added that in between the two dates those who have submitted their nomination will be able to campaign and seek support for their candidature.

During Saturday’s event, Mancienne also urged the party leaders and activists to remain focused on their task to form the next government in the island nation.

“In this short period of time through the National Assembly where we hold a majority, we have been able to bring about some changes, by pushing for truth, transparency, accountability and a more responsible governance from the executive,” explained Mancienne.

Mancienne also added: “Although we have made some progress we should not be complacent in our approach and stay on course of our mission which is to form the next government.”

“The work we are doing is to bring about change for the future generation. Through our work in parliament and through your work among the population, I am confident LDS will win the next presidential election but we need to work hard for it,” said Ramkalawan.

Linyon Demokratik Seselwa was formed in 2016 to contest the legislative elections and won the majority. It was the first time that the opposition controlled the country’s parliament.