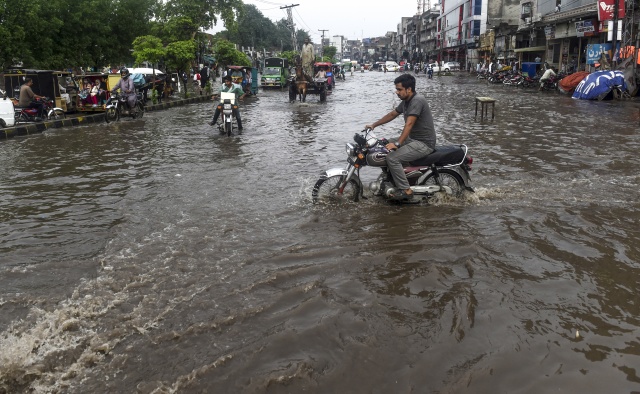 (FILES) In this file photo taken on July 20, 2019, commuters and pedestrians cross a flooded street after the monsoon rains in Lahore. Severe floods and lightning have claimed the lives of more than people across India, Nepal, Bangladesh and Pakistan, officials said on July 22 as the annual monsoon took its toll on the rainfed region. (ARIF ALI / AFP)

(AFP) - Severe floods and lightning have claimed the lives of more than 650 people across India, Nepal, Bangladesh and Pakistan, officials said Monday as the annual monsoon took its toll on the rainfed region.

More than 10 million people in the South Asian countries have been affected by the deluge, which has also forced tens of thousands to flee their homes.

In India, heavy rains since the start of July have killed at least 467 people with many districts in Uttar Pradesh, Bihar and Assam states cut off because of flooding.

Eight children playing in the open in Bihar's Nawada district were also killed by lightning on Friday, taking the toll in the eastern state to more than 100 as rivers overflowed their banks and swept away people, houses and cattle.

In Assam, 67 people have perished but the situation was likely to improve with no heavy rains predicted in the coming days.

But the prospects were grim for southern India's coastal state of Kerala where authorities Monday warned of "extremely heavy falls" in isolated places.

In neighbouring Nepal, 90 people have died and another 29 are missing, although the worst seems to be over in the Himalayan country.

"Rains have been predicted this week and we are on alert, but we don't expect it to have a severe impact," home ministry official Bedh Nidhi Khanal said.

Torrential rains in flood-prone Bangladesh have killed more than 97 people -- most by drowning and lightning strikes -- in the last two weeks, with swathes of agricultural fields lying inundated.

A third of the country has been submerged as major rivers including the Brahmaputra -- which broke a 44-year water-level record last week -- and the Ganges burst their banks from heavy rains and from water from India and Nepal.

At least 30 people have also lost their lives in Pakistan.

While the annual rains are crucial to replenishing water supplies in the impoverished region, they often turn deadly.

Experts blame poor planning, the lack of drainage facilities and tardy relief operations for the casualties.