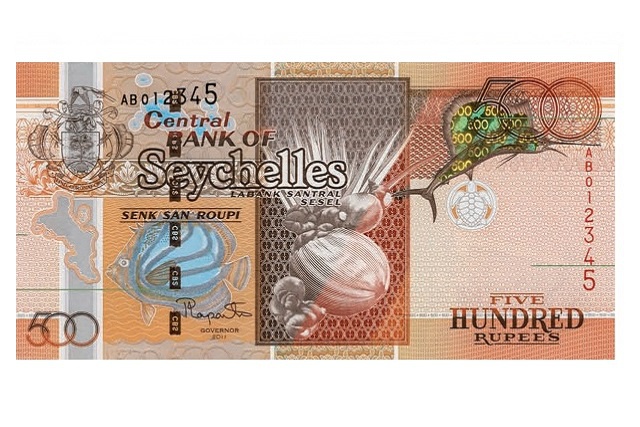 (Seychelles News Agency) - The Central Bank of Seychelles and the Seychelles police are calling on the public to be on the lookout for counterfeit Seychelles rupee notes.

This follows increased reports of such notes in circulation, more specifically 500 Seychelles rupee notes equivalent to around $40.

Expressing the authorities concern in a press conference this afternoon, the Head of Banking Services at the Central Bank, Mike Tirant called on the public to be on the lookout for these notes and to report any incidents so as to stem this practice.

“The false notes are not coming directly through the banks but rather through other commercial activities. Therefore, anyone doing transactions involving money is at risk of being paid with false notes. This is why we are appealing upon everyone to be vigilant so that they do not fall victim to this practice,” said Tirant.

He noted that detection is occurring mainly at the point when people deposit money at the banks.

“When someone is depositing money into an account and the bank’s officer detects that the notes are fake the bank does not accept the notes and the client will not be reimbursed.”

As counterfeit notes are worthless “no reimbursement of face value is given by the CBS,” reads a joint statement issued by the Central Bank and the Seychelles police.

While the amount of counterfeit notes currently in circulation is not known the Central Bank says it has been able to establish that it is on the increase because the frequency of reports from the banks on the matter has gone up.

CBS says financial institutions have already been advised to hand over any counterfeit notes detected to the police for investigation.

The police is also calling on anyone having information regarding the printing, tendering or possession of counterfeit notes to come forward so that the matter can be investigated by the fraud unit.

Under Seychelles laws “any person who forges any bank note, currency note or other for the payment of money is liable for life imprisonment while any person who is making or having in possession paper or implements for forgery without lawful authority or excuse is liable to seven years of imprisonment,” reads the joint statement issued today.

The issue of fake notes in circulation has been reported in the past and since last year CBS, which is the sole authority to issue bank notes in archipelago has embarked on an awareness campaign to familiarize the public with the security features that are embedded into genuine notes so that they can identify forged ones when they come across them.

The features include security thread, watermark and images that become apparent under ultraviolet light.