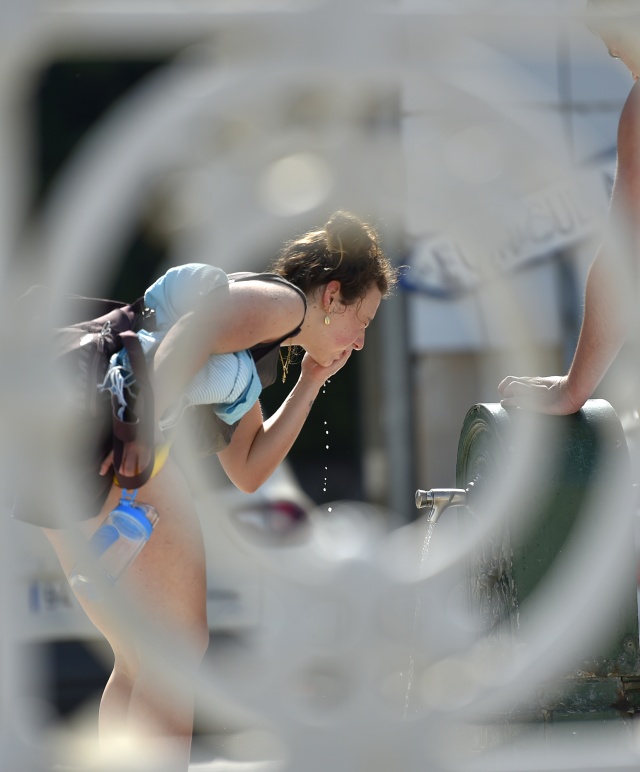 A woman cools off on a fountain at La Concha beach in the northern Spanish city of San Sebastian on June 26, 2019 at the start of a heatwave tipped to break records across Europe. Experts say such heatwaves early in the summer are likely to be more frequent as the planet heats up -- a phenomenon that scientists have shown to be driven by human use of fossil fuels. (ANDER GILLENEA / AFP)

(AFP) - Parisians were on Monday bracing for potentially the hottest ever temperature in the French capital this week as a new heatwave blasted into northern Europe that could set records in several countries.

Temperatures were already topping 30 degrees Celsius (86 degrees Fahrenheit) on Monday in Paris, but the mercury could soar beyond 40C on Thursday and topple a record dating back to 1947.

The severe heat, which forecasters say will only last a few days but will be exceptionally intense, is also expected to affect parts of Belgium, Luxembourg and the Netherlands.

"It's likely that these three countries will see temperatures at or above 40C for the first time," Francois Jobard, a forecaster from the French Meteo France weather office, told AFP.

The new blast of hot air comes less than a month after a heatwave scorched Europe at the end of June, forcing new attention on the issue of climate change.

"The heatwave that is too much," declared the headline in Le Parisien newspaper, highlighting that "Act II" of this summer's severe weather would further hurt production of crops from potatoes to grapes.

Jobard from Meteo France said that Thursday was shaping up to be "a potentially historically hot day".

"We are forecasting 41 or 42 degrees in Paris on Thursday and there is the strong chance of beating the record," he added.

The highest ever temperature recorded in Paris was 40.4 degrees Celsius (104.7 degrees Fahrenheit) in 1947. Since records began in 1873, this was the only time a plus-40 temperature was recorded in the French capital, he said.

With pollution climbing, only vehicles with a special clean air certificate will be allowed into central Paris on Tuesday, the local authorities said.

Britain will also see high temperatures, but will still be significantly cooler than countries on the continent.

The French government has warned that wine production will be down by between six to 13 percent over 2018, notably because of the ongoing heatwave.

French Agriculture Minister Didier Guillaume has said that the government will ask the EU to bring forward the payment some one billion euros in aid to farmers to help them through the dry spell.

He said farmers in around three dozen departments (regions) in France are being allowed to cut fallow fields as there was no food left to feed animals in the regular pastures.

Huge wildfires that have ravaged the mountainous Castelo Branco region of central Portugal and left dozens injured have been "90 percent" controlled, firefighters said Monday, but warned that strong winds could cause the flames to spread.

The New York City Triathlon, which had been scheduled for Sunday, was cancelled for the first time since its founding in 2001.

Scientists are increasingly confident that man-made climate change is driving up the length and intensity of heatwaves.

The three-day temperature peak from June 26-28 in France was four degrees Celsius (7.2 Farenheit) hotter than an equally rare June heatwave would have been in 1900, the World Weather Attribution (WWA) team said this month.

One study by the Swiss Federal Institute of Technology also said the deadly, weeks-long heatwave across northern Europe in 2018 would have been statistically impossible without climate change.

France saw its highest ever temperature on June 28 -- 46.0 degrees Celsius (114.8 degrees Fahrenheit) in Verargues in the Herault department of southern France.

Swedish teenage climate activist Greta Thunberg, who highlighted the problem of global warming through school strikes, is due to visit the French parliament on Tuesday.

Some right-wing MPs have said her visit is needless, with Julien Aubert of the Republicans describing her as a "prophetess in shorts, a Nobel Prize for Fear" in comments denounced by green activists.