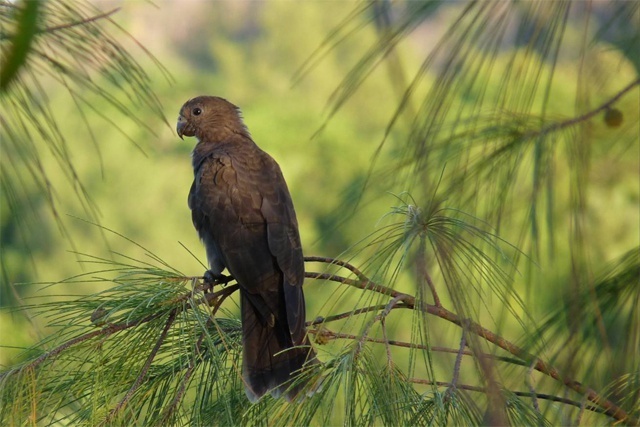 The black parrot, which is really greyish-brown in colour, is listed as vulnerable on the International Union for the Conservation of Nature’s (IUCN) red list due to its small population.  (Seychelles Islands Foundation)

(Seychelles News Agency) - Would you like to name one of Seychelles’ endemic birds? If so check out this latest campaign launched by the Seychelles Islands Foundation (SIF).

All you have to do is spot a black parrot wearing leg rings and then take a photo. This new campaign by SIF is aimed at locating the species on the second-most populated island of Praslin – the only island where the birds are found.

According to SIF visitors and locals can participate in the campaign. All they need to do is to take pictures of any black parrots wearing coloured rings on both legs.

“Some black parrots are wearing coloured rings. Every set of rings is a different colour so we know which bird it is,” Sophie Adams, the communications, education and outreach coordinator, told SNA on Monday. In total there are 270 black parrots tagged with such rings.

Adams said, “The colours of the rings on the parrot will help us to identify individual birds and learn more about their movements and behaviours.”

The black parrot, which is really greyish-brown in colour, is listed as vulnerable on the International Union for the Conservation of Nature’s (IUCN) red list due to its small population.

According to an estimate in 2013, there were then 520 to 900 black parrots on Praslin – one of the 115 islands of the Seychelles archipelago in the western of the Indian Ocean. However, SIF said the most recent estimate of the bird's population (as of last year) is between 1096 and 1742 birds.

Threatened by invasive bird species such as the Indian Mynah, black parrot chicks are in constant danger from other aggressive birds, feral cats, rats, invasive ants and even once the ring-necked parakeet, which now is completely eradicated.

The campaign will run for as long as the SIF is monitoring the black parrots which will be for a very long time.  However, the prize of naming black parrots will only be awarded in the first year of the campaign.

The black parrot project officer, Monica Griffith, said the campaign is involving members of the public as their participation is very crucial for the existence of the species.

“SIF is committed to engaging the public in our science and conservation work. We know many people are passionate about Seychelles’ wildlife, so we designed a campaign where people can get involved in an easy and fun way, and will also have a great benefit to our data and monitoring work,” Griffith said.

The officer added: “We want to encourage members of the public to really feel like they can contribute to helping to save the parrots. It is a way for everyone to join in, even just a little bit. We hope people will feel a sense of ownership, and Praslin residents will be proud to have parrots visiting their gardens.”

The campaign requires participants to add the date, time and location of where they saw and took the photos of the black parrot. The photos must be sent via email to blackparrot@sif.sc.

“All useable photos will be submitted into a draw. The more photos a person submits, the more entries they will have and the greater the chance of naming a black parrot. We will draw the photos every time we have a new parrot to name,” said Griffith.

For people taking the photos, Griffith has this advice on where the bird can be spotted.

“Low down in fruit trees is the best chance to see them clearly. Although they love the native palms it can be hard to see them in those as they can be very tall. Because it is not the breeding season right now they are more dispersed around the island, just travelling around looking for food. Fruit trees such as starfruit, Jamalac or bilimbi are their favourites so if you have those in your garden you may see them coming to eat,” explained Griffith.

Every year, the species is monitored closely during its breeding and hatchings season, usually December to April, by the Seychelles Islands Foundation (SIF), a public trust which manages the unique endemic palm forest reserve of the Vallée de Mai on Praslin Island.

The SIF research team painstakingly searches for black parrot nests and monitors them on a weekly basis throughout the season to count the number of eggs produced and monitor the hatching and fledgeling stages.