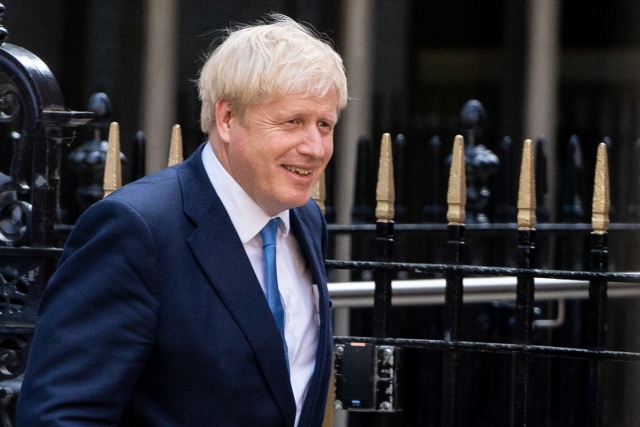 New Conservative Party leader and incoming prime minister Boris Johnson leaves the Conservative party headquarters in central London on July 23, 2019. Boris Johnson won the race to become Britain's next prime minister on Tuesday, heading straight into a confrontation over Brexit with Brussels and parliament, as well as a tense diplomatic standoff with Iran. (Niklas HALLE'N / AFP)

(AFP) - Boris Johnson will officially become Britain's prime minister on Wednesday with a mission to deliver Brexit by October 31 come what may, while fending off rebellious MPs.

The former foreign secretary, best known for his gaffes, rhetorical flourishes and turbulent love life, was announced as the new leader of the governing Conservative Party on Tuesday.

The 55-year-old will officially take over the reins of power at a meeting with Queen Elizabeth II in Buckingham Palace later on Wednesday and will then give his maiden speech as prime minister outside his new 10 Downing Street home.

Johnson's predecessor Theresa May was forced out after failing to get parliament to support a Brexit deal she struck with EU leaders that he has promised to overhaul, despite Brussels insisting no changes are possible.

During his victory speech on Tuesday, Johnson urged the country to "ping off the guy ropes of self-doubt and negativity" and pledged to unite a badly divided country.

But his promise of leaving the European Union with or without a deal puts him on a collision course with high-profile MPs in his own party who do not want a no-deal Brexit, threatening his wafer-thin majority and raising the prospect of an early general election.

US President Donald Trump was the first world leader to offer his congratulations, saying: "He will be great!"

Johnson has never hidden his ambition for power, using his trademark jokes and bluster to pull off unlikely electoral victories, but he takes over at a time of immense upheaval.

Three years after the referendum vote to leave the EU, Britain remains a member after twice delaying its departure.

Johnson led the 2016 "Leave" campaign and -- after May delayed Brexit twice -- insists the latest deadline must be kept, calling it a "pivotal moment" in Britain's history.

However, Brussels says it will not renegotiate the divorce deal it struck with May to end the 46-year partnership -- even though MPs rejected it three times.

EU negotiator Michel Barnier said he wanted to work with Johnson "to facilitate the ratification of the withdrawal agreement and achieve an orderly Brexit".

Johnson faces significant opposition from parliament over his threat to leave with no deal, including from Conservative colleagues.

Addressing party members after his win, Johnson promised to "work flat out from now on", saying he would announce his top team in the coming days.

His government has a majority of just two -- 320 votes to 318 -- in parliament's lower House of Commons and Westminster is watching for any signs of an immediate challenge to his power.

The main opposition Labour Party is not expected to force a confidence vote this week.

MPs are expected to go on their holidays on Friday, giving Johnson some breathing room over the summer to try to get a new Brexit deal.

But when he returns, if "no deal" looks likely, many MPs have vowed to stop him -- a move that could trigger an early election.

Johnson is also faced with escalating tensions with Iran.

The Islamic republic seized a UK-flagged tanker in the strategic Strait of Hormuz last Friday -- two weeks after UK authorities detained an Iranian tanker off Gibraltar.