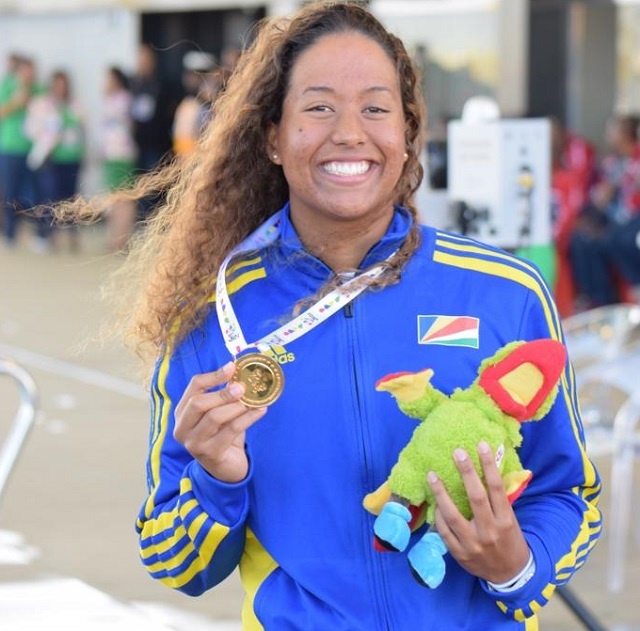 Passon won her seventh gold medal along with three silver and a bronze, making her the most decorated Seychellois athlete in the Games. (Ah Men Chan Chin Wah)

(Seychelles News Agency) - Felicity Passon is the best Seychellois swimmer ever in the Indian Ocean Islands Games after her performance on the last day of the swimming competition on Tuesday in Mauritius.

Passon won her seventh gold medal along with three silver and a bronze, making her the most decorated Seychellois athlete in the Games.

The Seychelles’ President Danny Faure has, on behalf of all Seychellois, expressed appreciation and congratulations to Passon for her glittering and golden performance at the 10th Indian Ocean Islands Games (IOIG).

“Seychelles is very proud of you for this outstanding achievement and I am sure that I am echoing the sentiments of every one of us in expressing heartfelt congratulations to you,” said Faure.

“A lot of courage, determination and fighting spirit is needed to win so many races, let alone break Indian Ocean Islands Games records, on a daily basis and over the very short period of time that the swimming competition lasted. But it shows that seriousness, persistence, long hours of arduous training and the will to succeed pays off in the end and the result is sweet,” added the President.

Passon has surpassed the performance of the previous Seychellois swimming star of the Games, swimmer Shrone Austin, who won seven gold, one silver and two bronze medals at the 7th Games in Madagascar in 2007.

The Indian Ocean Island Games is a multi-sport event held every four years among athletes from Indian Ocean island nations. The Games were created by the International Olympic Committee in 1977. The Games bring together athletes from Mauritius, Seychelles, Comoros, Madagascar, Mayotte, Reunion, and the Maldives.

President Faure also congratulated all other athletes who have won medals at the Games.

Following Passon, the next biggest gold winner was Clementina Agricole in weightlifting with three gold medals.

The other top athletes who have won gold for Seychelles, an archipelago in the western Indian Ocean, are Ned Azemia in the 400m hurdles and Norris Brioche in high jump. In swimming, Mathieu Bachmann won gold in the 100m butterfly, Stephanie Mondon in the 50m freestyle handisport, Samuele Rossi in the 50m breaststroke and Simon Bachman in the 1,500m freestyle.

President Faure also had a message for Seychellois athletes still in the competition.

“I am certain that there will be more victories and medals to come. Rest assured that as one nation we are all supporting you,” he said.

In team sports, Seychelles has reached the semi-final of the football, volleyball both men and ladies and the ladies only in basketball.

In the football semi-final, Seychelles will face Reunion on Wednesday at 2.30 pm while hosts Mauritius will meet Mayotte. In volleyball, the ladies side will face Mauritius in the semi-final while the men’s team will meet Madagascar.