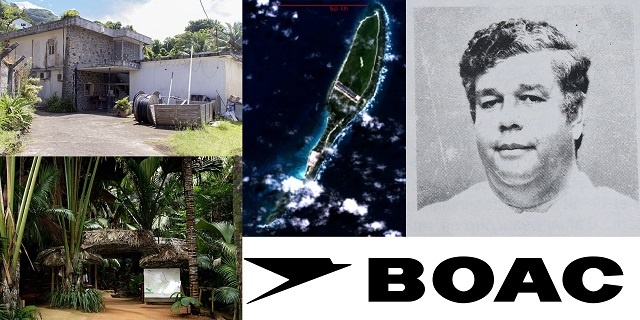 (Seychelles News Agency) - When the calendar hits July the calendar has tipped over the halfway point of the year. But what events happened in July in Seychelles in days gone by? SNA presents six interesting facts in the history of the 115 islands in the western Indian Ocean.

The island of Coetivy - a small coral island 290 km south of the main island of Mahé, was discovered by Chevalier de Coetivi, commander of the ‘Isle de France’. In 1908 it was transferred from Mauritius to Seychelles. In 1970 the island was purchased by the parastatal Seychelles Marketing Board.

Coëtivy Island became famous for its shrimp farms (black tiger prawn) and shrimp processing plant that operated on the island. Large-scale production began in August 1992 but due to financial constraints closed down in 1998.

The first British Airways Overseas Corporation super VC10 arrived at the Mahé International Airport. The then Chief Minister James Mancham was among the passengers. Thousands of people flocked to the airport to witness this event.

An ordinance was passed by the legislative council that made it unlawful for patchouli oil to be exported from the colony of Seychelles without having been previously passed as of ‘standard quality’ by the Government Department of Agriculture. Persons violating the law were fined $37 and sentenced to six months imprisonment.

The Seychelles Broadcasting Station, also known as the first Radio Station, opened at Union Vale. It was $0.20 cents for twenty-five seconds. Broadcasting started from 5.15 p.m. to 8.30 p.m.

In May 2018, after 53 years, the radio station was demolished, making way for a new modern national broadcasting house to be completed in 2020.

The Vallée de Mai – which was declared a UNESCO World Heritage site in 1983 - was threatened by a blazing fire. The fire, on the second-most populated island of Praslin, which had started on that Sunday on an estate at Côte D’or threatened to sweep through the Vallée de Mai.

Altogether, 150 men turned out to fight the fire under the command of the chief police officer from the main island of Mahé. Some 70 acres of land were devastated by the time the fire was put out on Tuesday afternoon.

Monseigneur Felix Paul was consecrated as the first Seychellois Bishop of Seychelles. The ceremony took place in the stadium at Victoria, led by Monseigneur Jean Margeot of Port Louis and six other bishops.

Felix Paul who resigned from the Catholic Church in 1994, died on November 21, 2001, and he is entombed in the Cathedral of the Immaculate Conception.