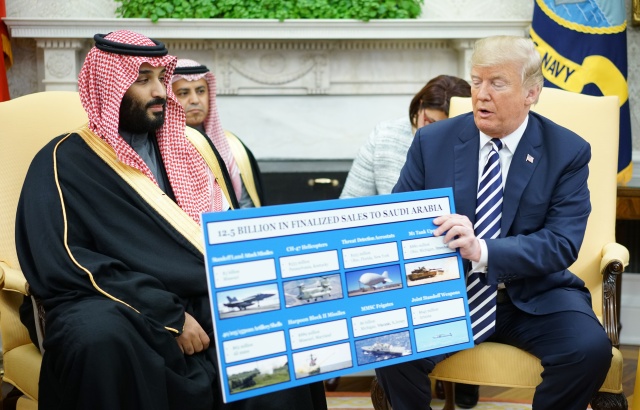 (AFP) - President Donald Trump on Wednesday vetoed three congressional resolutions barring billions of dollars in weapons sales to countries including Saudi Arabia and the United Arab Emirates, which are engaged in a devastating war in Yemen.

The resolutions "would weaken America's global competitiveness and damage the important relationships we share with our allies and partners," Trump said in letters to the Senate justifying blocking them.

It is the third time the president has employed his veto power since taking office.

The measures cleared Congress this month in a strong rebuke to Trump, whose administration took the extraordinary step of bypassing legislators to approve the sales in May.

Secretary of State Mike Pompeo had said the administration was responding to an emergency caused by Saudi Arabia's arch-foe Iran.

But lawmakers including some Senate Republicans said there were no legitimate grounds to circumvent Congress, which has the right to disapprove arms sales.

Senator Lindsey Graham delivered a stinging rebuke to Riyadh last month, saying he hoped his vote against the sales would "send a signal to Saudi Arabia that if you act the way you're acting, there is no space for a strategic relationship."

The senator was referring to last year's brutal murder of journalist Jamal Khashoggi in Turkey at the hands of Saudi agents, an incident that outraged lawmakers and triggered a full-blown crisis in Riyadh's relations with the West.

Critics also say the arms sales would aggravate the war in Yemen, where Saudi Arabia is leading a US-backed coalition that also includes the UAE in a battle against the Iranian-supported Huthi rebels.

The UN says the conflict has triggered the world's worst humanitarian crisis.

But Trump argued Wednesday that barring the sale of US weapons "would likely prolong the conflict in Yemen and deepen the suffering it causes," and that "without precision-guided munitions, more -- not fewer -- civilians are likely to become casualties."

The US president also pointed to Iran in justifying blocking the resolutions.

Saudi Arabia and the United Arab Emirates are "a bulwark against the malign activities of Iran and its proxies in the region," and the arms sale licenses Congress sought to block enhance their "ability to deter and defend against these threats," he argued.

Tensions between Washington and Tehran have soared since Trump pulled the US out of a deal with Iran last year that was aimed at curbing its nuclear program, and imposed punishing sanctions.

The US has said it brought down one and possibly two Iranian drones last week, and has blamed Iran for a series of mysterious attacks on tanker ships in strategic Gulf waters.

Tehran shot down an unmanned US aircraft in June, after which Trump announced that he had called off air strikes on Iran at the last minute because the resulting death toll would have been too high.

Trump has said that the choice between war and diplomacy with Iran "could go either way," and that he is "okay either way it goes."

General » Be a reporter: Write and send your article » Subscribe for news alert
Tags: US, Saudi, weaponry, diplomacy, politics, veto