Uncertainty for Tunisia as president dies at 92 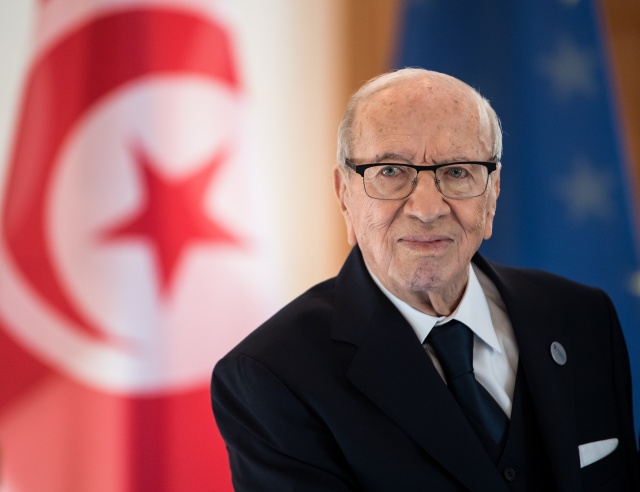 Essebsi, who had already ruled out running again for office, was hospitalised with a severe illness in late June and had returned to intensive care on Thursday. Media reports said he would be buried on Saturday.

United Nations Secretary-General Antonio Guterres said Essebsi would "be remembered for his bold determination to uphold democratic rule in Tunisia and to respect and promote the rights of its citizens".

Neighbours Morocco and Algeria both also paid tribute to Essebsi, with three days of national mourning announced in Algiers.

Tunisia's parliament announced its speaker Mohamed Ennaceur would take the reins as interim president, and within hours he was sworn in as the new leader.

The electoral commission later said the election would "probably" be contested on September 15.

The birthplace of the Arab Spring revolts, Tunisia is the only country affected by the uprisings to have pushed through democratic reforms -- despite political unrest, a sluggish economy and jihadist attacks.

Islamist extremists have staged repeated deadly attacks since the overthrow of Ben Ali, raising fears for the country's fragile democracy and throttling its tourism industry.

In March 2015, gunmen killed 21 tourists and a policeman at the National Bardo Museum in Tunis.

In June that year, 30 Britons were among 38 foreign holidaymakers killed in a gun and grenade attack on a beach resort near the city of Sousse.

In November 2015, a suicide bombing against a bus in the capital carrying presidential guards killed 12. All three attacks were claimed by the Islamic State group, and they prompted a state of emergency that remains in place.

A veteran politician, Essebsi had served as an adviser to Habib Bourguiba, the father of Tunisia's independence from France, holding a number of key jobs under him and later under Ben Ali.

Over the years, Essebsi was director general of the national police and interior minister. He later held the defence portfolio before becoming ambassador to France as well as Germany.

Essebsi is the founder and chairman of the secularist Nidaa Tounes (Call of Tunis) party.

Nidaa Tounes won the polls in 2014 and formed a coalition with the Islamist-inspired Ennahdha, which lasted four years before the two parties split.

But the party has struggled to overcome bitter internal divisions between Prime Minister Youssef Chahed and Essebsi's son, Hafedh, leading to the premier being sidelined from Nidaa Tounes and forming his own rival party, Tahia Tounes.

Interim leader Ennaceur vowed on television that "the state will continue to function".

The 85-year-old also fell ill in June, raising concerns about his own ability to hold high office.

Elected to Tunisia's first post-revolution parliament in 2014, the former lawyer had held two ministerial posts under post-independence leader Habib Bourguiba, but stayed out of politics during Ben Ali's rule.

"The most important thing during this transition period is continuity," Nidaa Tounes MP Bochra Ben Hmida told AFP. Ennaceur "will know how to ensure this continuity and will respect the constitution".

Essebsi's death comes amid a debate over who will be able to run in the next presidential elections.

Essebsi neither rejected nor enacted an amended electoral code passed by parliament in June that would bar the way for several strong candidates including media magnate Nabil Karoui.

Karoui, who has formed a political party, was charged with money laundering this month after he stated his intention to run for office.

General » Be a reporter: Write and send your article » Subscribe for news alert
Tags: Tunisia, politics