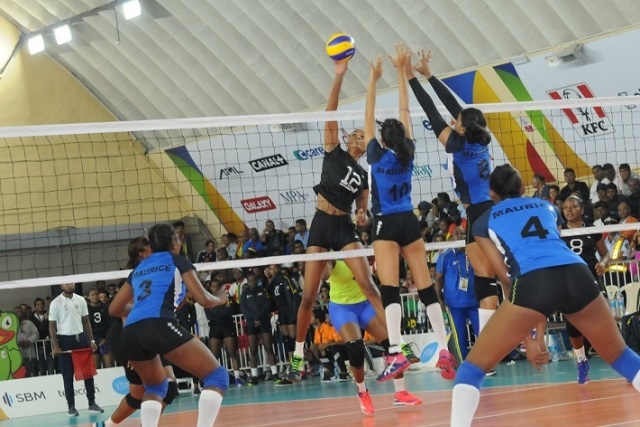 Seychelles' captain Petra Richard on the attack against Mauritius in the semi-final. (Patrick Joubert, Seychelles Nation)

(Seychelles News Agency) - The Seychelles’ ladies volleyball team retained its title in the 10th edition of the Indian Ocean Island Games, which will end on Sunday with the closing ceremony.

In the heavily contested final on Saturday, Seychelles came back from losing two sets to nil to win the match against Madagascar and clinch the gold medal. This is the third consecutive win for the Seychelles’ side in the Indian Ocean Island Games.

The volleyball gold helped Seychelles, an archipelago in the western Indian Ocean, raise its medal total to 110 at the Games, among which were 28 gold medals, three more than in the 9th edition of the Games in Reunion in 2015.

Speaking to reporters of the Mauritius Broadcasting Corporation (MBC), the Seychelles' Vice President, Vincent Meriton, said the volleyball victory had made the whole country proud.

“I can’t remember a team losing by 2-0 and coming back to win a match but we did it. Our young people have made us proud,” said Meriton.

The Seychelles’ team coach, Julien Onezime said, “This victory was not easy for us but we knew that if the Madasagascar team allowed us to win one set we were going to win.”

He added that “after losing 2-0, I told my players the amount of work we have done and the amount of energy we have spent in the various gyms, after 2-0 we were still fit and we can still win the game. The girls came back and did it.”

Terence Barbe, chairperson of the committee overseeing the preparation for the games told SNA on Saturday that the committee is satisfied with the performance of Team Seychelles.

Swimming events brought in 11 of Seychelles' gold medals, followed by weight lifting with nine medals and athletics with six.

The top gold medallist of the games for Seychelles was swimmer Felicity Passon with seven gold medals, a performance that Barbe described as excellent.

He said that more gold medals could have been won if not for injuries of some key athletes among whom was Seychelles Sportsman of the Year, boxer Keddy Agnes, who was hospitalised and had to forfeit his heavyweight final on Friday.

Team Seychelles comprised of 228 athletes (147 males and 81 females) and 97 officials competing in 13 disciplines.

The Indian Ocean Island Games is a multi-sport event held every four years among athletes from Indian Ocean island nations. The Games were created by the International Olympic Committee in 1977. The Games bring together athletes from Mauritius, Seychelles, Comoros, Madagascar, Mayotte, Reunion, and the Maldives.

It was announced on Saturday by the organising Committee that the Maldives will host the next edition of the Games in 2023.