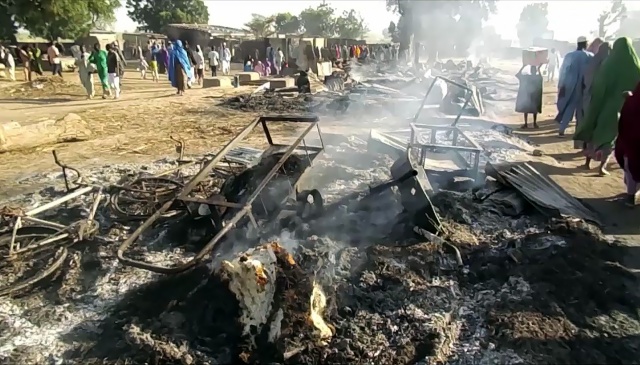 Smoldering ashes and charred items are seen on the ground in Budu near Maiduguri on July 28, 2019, after the latest attack by Boko Haram fighters on a funeral in northeast Nigeria has left 65 people dead. (Audu Marte / AFP)

(AFP) - An attack this weekend by Boko Haram fighters on a funeral in northeast Nigeria has left 65 people dead, almost triple the initial toll, a local official said Sunday.

Dozens more bodies were discovered following the assault Saturday by gunmen on a village close to the regional capital Maiduguri.

Bulama said more than 20 people died in the initial attack on a funeral gathering. Dozens more were killed as they tried to chase after the jihadists.

The leader of a local anti-Boko Haram militia confirmed the death toll, while giving a slightly different account of the attack.

Bunu Bukar Mustapha told AFP 23 people were killed as they returned from the funeral and "the remaining 42 were killed when they pursued the terrorists".

AFP journalists at the scene saw houses burnt in the attack. Relatives collected the bodies of those slain for burial.

Bulama said he thought the latest attack was in retaliation for the killing two weeks ago of 11 Boko Haram fighters by local residents when the jihadists approached their village. The residents also captured 10 automatic rifles.

In September last year, the group killed eight people and stole livestock in two villages in the area after residents tried to stop them from taking their animals.

Boko Haram has waged a decade-long campaign of violence in northeast Nigeria that has killed around 27,000 people and displaced more than two million.

There are persistent attacks despite repeated claims from the Nigerian government that it has broken the insurgency.

The jihadists have splintered between the Boko Haram faction loyal to historic leader Abubakar Shekau and an affiliate of the Islamic State group.

Shekau's group tends to hit softer targets including civilians, while the Islamic State West Africa Province (ISWAP) has since last year ratcheted up its campaign against the Nigerian military.

In June, 30 people were killed by a triple suicide bombing targeting football fans in Konduga, 38 kilometres (24 miles) from Maiduguri. The attack had the hallmarks of Shekau's faction.

Late Thursday, the group attacked a camp for displaced people outside the state capital, killing two residents and looting food supplies after burning a nearby military base.

Communities have increasingly turned to self-defence groups to protect themselves against the jihadist attacks.

Vigilantes and local hunters have taken up arms to safeguard local residents amid widespread complaints that the military does not do enough to defend them.