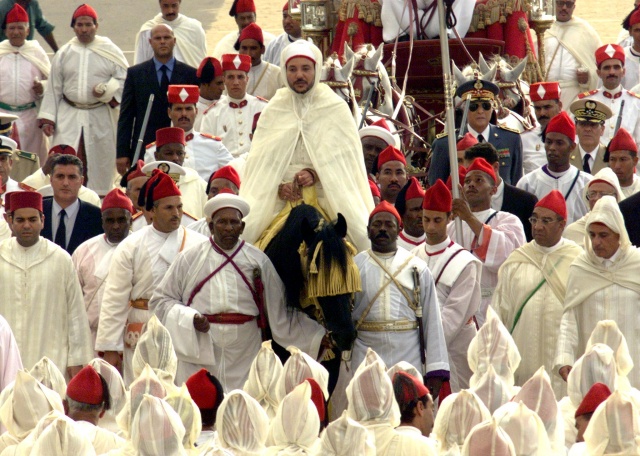 (FILES) In this file photo taken on July 31, 2000 Moroccan King Mohammed VI rides a horse during ceremonies marking his first year on the throne, at the Royal palace in Rabat. Morocco's King Mohammed VI has cast himself as a modernist open to change, while discretely exercising absolute power from the throne he inherited 20 years ago. He has often presented that duality in photo ops, posing for official pictures in traditional garb then switching to snazzy suits for social media snapshots with celebrities during his frequent trips abroad. Born on August 21, 1963, Mohammed VI was crowned at the age of 35 after the death of his father Hassan II on July 23, 1999.(ABDELHAK SENNA / AFP)

(AFP) - Morocco's King Mohammed VI has marked 20 years on the throne by pardoning thousands of prisoners, including some from the "Hirak" protest movement that rocked the country in 2016.

On the eve of the royal anniversary on Tuesday, an official statement announced 4,764 people were to be pardoned including some detained during the months of protests in the long-marginalised northern Rif region.

No further details were given.

The Al-Hirak al-Shaabi, or "Popular Movement", was sparked by the death of a fisherman but soon spiralled into demands for more development and action against corruption and unemployment.

More than 400 protesters are thought to have been arrested and tried in connection with the demonstrations, but no official figures are available. Around 250 of them have previously been pardoned.

On Monday night the king also pledged a government reshuffle and an injection of "new blood" into political and administrative positions to help tackle inequality.

In a speech at his palace in the northern city of Tetouan, the 55-year-old monarch, who succeeded his father Hassan II in 1999, welcomed progress in infrastructure and freedoms in the country but said the efforts had not had "sufficient impact".

A new constitution passed by a July 2011 referendum strengthened the powers of the prime minister and parliament.

But the king retains overall authority as head of state, chief of the military and the country's top Islamic authority as well as tight control over key sectors of the economy.

Dream of World Cup final is over but Moroccans hail heroe