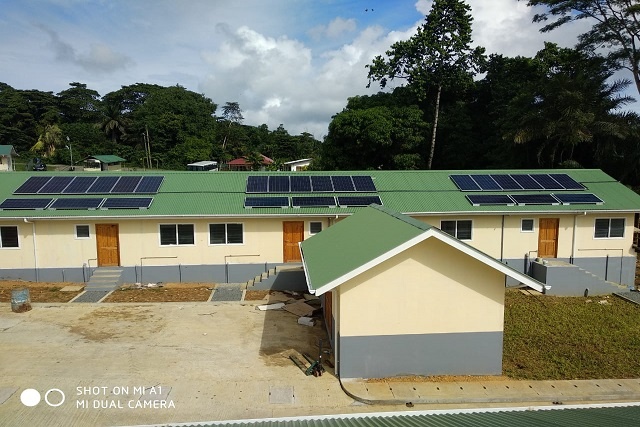 (Seychelles News Agency) - The first government housing estate outfitted with photovoltaic (PV) solar panels has opened in Seychelles. The Barbarons Transit Homes estate was inaugurated over the weekend and represents the first step in the democratisation of solar PV panels to 700 families in the nation by the Public Utilities Corporation (PUC).

Philip Morin, the chief executive of the corporation said this process is bringing solar energy to the 42 families who cannot afford to install solar systems on their own.

The housing estate has benefited with the solar panels through a government project being implemented with a $3.4 million grant from the Indian government.

Through the project, 700 Seychellois families identified as vulnerable are receiving free photovoltaic panels to help them lower their electricity consumption.

The households identified are those already being assisted by the Agency for Social Protection, which is responsible for providing comprehensive social security services and social relief against vulnerability in Seychelles – 115 islands in the western Indian Ocean.

Morin explained that even though 700 households will benefit from the project, to start with, photovoltaic systems will be installed at housing estates such is the case with the one at Barbarons in the western district of Grand Anse on the main island of Mahe.

“PUC will also be installing PVs on low-cost houses. In addition, the corporation will install a one-megawatt unit on Ile de Romainville where productions will be allocated to those houses that are eligible to benefit under the project” explained Morin.

The $1.5 million housing project was opened on Saturday by President Danny Faure and the Minister responsible for land use and housing Pamela Charlette.

The transit homes, the first of its kind, aim to bring temporary housing solutions to families in need, making it important that some of the houses remain empty at all times in case of any eventualities.

The estate will provide temporary shelter to families in desperate situations after losing their homes to fire or to natural disasters such as landslide and flooding and as they try to piece their lives together and start afresh.

“In 2017, 25 cases of house fires and other disasters were reported, 21 in 2018 and up to now this year 8 cases have been recorded. Among the cases there were extended families which made it more difficult to rehouse them,” said Charlette.

Minister Charlette said that in the past when disasters struck families often had to be housed in guest houses or privately rented houses, adding that often this was for long periods because of the unavailability of social houses and the government had to shoulder these exorbitant costs.

Charlette said that it is the objective of the government to build similar transit homes in other regions of Mahé where land is available.

400 homes in Seychelles to soon benefit from solar energy installation