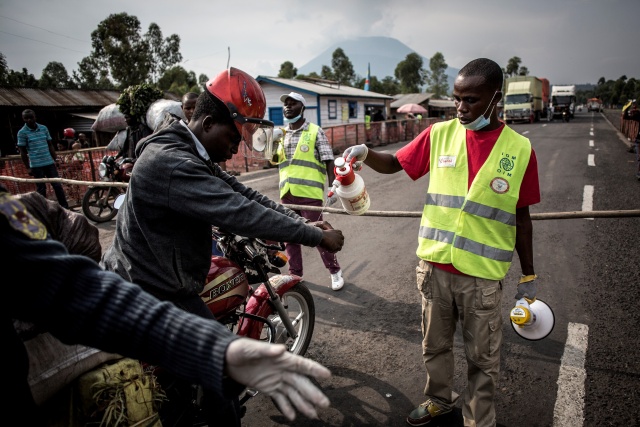 (FILES) In this file photo taken on July 16, 2019 a motor taxi driver gets his hands washed at an Ebola screening station on the road between Butembo and Goma in Goma. An Ebola epidemic raging in eastern DR Congo marks its first year on August 1, 2019 in a mood of fear mingled with hope that fresh money and a change of leadership will turn the tide. So far, 1,790 people have died of the dreaded haemorrhagic virus since the first cases were recorded on August 1 last year. It is the second highest death toll from an outbreak in Ebola's history, and the mortality rate is high -- two-thirds of patients have died, against a historic average of 50 percent. (JOHN WESSELS / AFP)

(AFP) - An Ebola epidemic raging in eastern DR Congo marks its first year on Thursday in a mood of fear mingled with hope that fresh money and a change of leadership will turn the tide.

So far, 1,790 people have died of the dreaded haemorrhagic virus since the first cases were recorded on August 1 last year.

It is the second highest death toll from an outbreak in Ebola's history, and the mortality rate is high -- two-thirds of patients have died, against a historic average of 50 percent.

Despite a campaign backed by the United Nations and international donors, doctors are struggling against an epidemic spreading with the help of mistrust, superstition and militia attacks.

In Goma, the capital of North Kivu province, the mood among many is frustration and despair.

"We are carrying out the guidelines, we respect the rules (about daily handwashing and checking temperatures), but what we want is for this epidemic to end quickly," said Jonas Shukuru, a motorcycle taxi boss.

"The government has to make tackling it a priority -- we don't want to die both from lack of security and this epidemic."

"The authorities have to assess what's working in the response against Ebola -- a whole year has gone by," said John Banyene, a civil society leader.

Fears are high that the highly contagious virus will cross the Democratic Republic of Congo's porous borders.

"Our livestock farmers sell their cattle in DR Congo. Rebel groups and poachers go back and forth across the border. The risks are high."

The good news is that concerns about funding have eased since the UN's World Health Organization (WHO) on July 17 declared the outbreak a "public health emergency of international concern," a rare designation only used for the gravest epidemics.

The World Bank has already said it will contribute a further $300 million (269 million euros) in addition to $100 million it has already donated.

"Especially in the last couple of weeks there is renewed commitment to finance the shortages we were facing," WHO chief Tedros Ghebreyesus said in the Nigerian capital Abuja on Saturday after holding talks with DR Congo President Felix Tshisekedi.

Beyond money, however, the anti-Ebola campaign faces hefty challenges on the ground.

Attacks on health workers have had a devastating effect.

Fighting Ebola is a labour-intensive operation -- like a land war, it requires an army of personnel.

These workers provide hygiene advice or go door-to-door to trace people who have been in contact with Ebola patients. Clad in full-protection suits, they also care for the sick and bury the dead.

In a region where many people survive on just a few dollars a day, their recruitment has made them a target for jealousy and extortion, sometimes lethally so.

"They get threatened, including death threats," a prevention worker hired by an international organisation told AFP.

Seven health workers have been murdered and more than 50 have been seriously hurt, according to an unofficial tally.

The Ebola campaign is undergoing a leadership change, with Tshisekedi himself taking over the reins -- a move that caused Health Minister Oly Ilunga to quit.

Tshisekedi's pointman in the crisis is Jean-Jacques Muyembe, an Ebola veteran who was part of the team that investigated the very first known outbreak of Ebola in what was then Zaire, in 1976.

One of his first decisions will be to determine the future of immunisation strategy.

The outbreak is the first time that vaccines have been used as a weapon against the virus.

The WHO has recommended the introduction of a second product made by healthcare company Johnson & Johnson, which could be used for populations removed from the epicentre, while saving limited stocks of the Merck vaccine for the front lines.

But the health ministry under Ilunga had resisted such a move, citing the risks of introducing a new product in communities where mistrust of Ebola responders is already high.

The Merck vaccine is tested but unlicensed, while the second drug is still in the trial investigation stage.