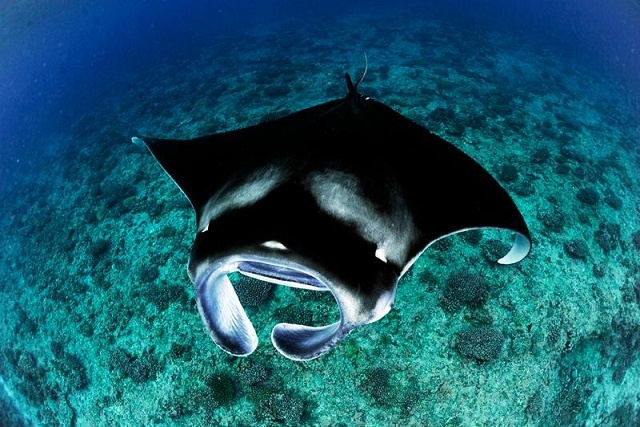 Peel said that as Seychelles is such a vast and remote area, the fact that we are seeing these animals aggregating frequently in this place is really important. (Guy Stevens, Manta Trust)

A newly published study shows that a significant population of reef manta rays spends a lot of time in the waters around Seychelles’ remote D’Arros Island and St Joseph Atoll.

The study which was published earlier this month after four years of research done by the Switzerland-based conservation group Save Our Seas Foundation emphasises the importance of the region for the globally vulnerable species.

According to an article on July 12 on the Save Our Seas Foundation website, Scientist Lauren Peel, from the University of Western Australia said, “When we first started working with the mantas at D’Arros, we knew that the aggregation there was fairly reliable based on previous sighting records we’d received, but we didn’t know how resident the mantas were to D’Arros Island and the wider Amirante region over time.”

The reef manta ray is a cartilaginous fish big in size with two triangular-shaped pectoral fins that resemble the wings of a bird which is why some people refer to mantas as “birds of the sea.”

These transmitters allowed the researchers to monitor the movement patterns of each manta ray through 70 acoustic receivers scattered throughout the Seychelles’ island group of Amirantes.

The method used in the study was that each time a tagged manta passed through the array, a coded signal was logged detailing the animal’s location. On average, tagged manta rays were detected at D’Arros and St. Joseph 64 percent of the days they were tracked, demonstrating high levels of residency.

Peel said that from a conservation point of view the high residency rates that were reported for tagged mantas at D’Arros and St Joseph are really interesting especially as not only juvenile mantas were recorded but adults as well.

“Given that Seychelles is such a vast and remote area, the fact that we are seeing these animals aggregating frequently in this place is really important, not only for understanding the drivers of their behaviour but for conserving this vulnerable species in Seychelles as a whole,” she said.

Currently, manta rays are heavily sought after and unsustainably fished to supply gill plates for use in Asian medicines. As a result, manta populations have been devastated globally in recent decades.

“Mother nature has been extremely generous to this special country of 115 scattered islands. The Seychellois can feel a great sense of pride for this pristine place and the captivating manta rays that call it home,” said Michael Scholl, chief executive officer of the Foundation.

“Untouched by harmful human activity, the marine life around D’Arros and St. Joseph have flourished,” he said and added that “creating a scientifically-informed marine protected area around this region will help ensure mantas, and all the other breathtaking life found here, can continue to thrive.”

Aside from mantas, D’Arros and St Joseph have been identified as critical habitat for a plethora of other marine species including the recent discovery of the species -- Eviota dalyi.

The island of D’Arros was purchased by the Save Our Seas Foundation in 2012 and officially became a protected nature reserve under the Nature Parks and Conservancy Act in 2014.

Species » Be a reporter: Write and send your article » Subscribe for news alert
Tags: Save our Seas Foundation, reef manta ray, Manta Trust