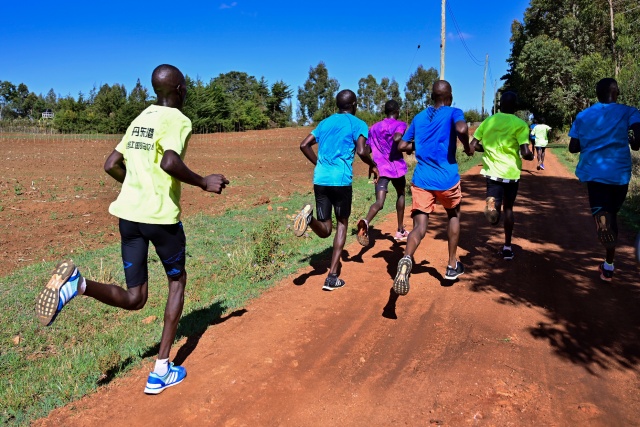 Marathon runners carry out a 'speed-work' along the back roads Iten, known colloquially as the 'world's running capital', legendary for producing some of Kenya's most elite athletes and a training ground for other international top distance runners on May 9, 2019. Of the thousands of professional runners registered with Kenya's athletic federation, only a small handful of the most elite competitors are regularly screened by the national doping watchdog Anti-Doping Agency of Kenya (ADAK). (TONY KARUMBA / AFP)

(AFP) - Kenya suffered international embarrassment in 2016 when a string of doping scandals brought the country famed for its distance runners within a whisker of disqualification from the Rio Olympics.

"It was a time when Kenya faced an enormous challenge in terms of the very integrity of our sports," said Japhter Rugut, who heads the Anti-Doping Agency of Kenya (ADAK), established in the wake of the scandal.

Kenya scraped through to Rio. But while its sporting authorities promised to clean up their act, Kenyan athletes have proved harder to convince.

A year after the scare, Jemima Sumgong -- who in Rio won Kenya's first-ever Olympic gold in the women's marathon -- tested positive for the banned substance erythropoietin (EPO) and was suspended.

Between 2004 and August 2018, 138 Kenyan athletes tested positive for performance-enhancing drugs, according to a World Anti-Doping Agency (WADA) report published in September 2018.

The report concluded that nandrolone, an anabolic steroid, corticosteroids and EPO were the substances most used by local athletes.

However it found there was "no evidence of an institutionalised system" of doping in Kenya.

Thirty-six Kenyan runners are currently suspended, according to the Athletics Integrity Unit.

Nevertheless, efforts to clean up the sport are beginning to bear fruit.

It has created biological passports for about 40 elite athletes to track their data over time, a development made possible by the opening of a WADA-approved blood testing laboratory in Nairobi in 2018.

In line with International Association of Athletics Federation (IAAF) guidelines, Kenyan athletes selected for the 2019 World Championships starting in Doha in September will be subject to a minimum of four blood and urine tests.

"Qualification will be done on time and testing," says Jackson Tuwei, president of the Kenyan Athletics Federation.

"We have made this very clear to all our athletes that those who want to go to worlds, must also qualify by being tested."

But beyond the elite level, tackling doping remains a monumental challenge.

There are 4,000 top-level athletes registered with the athletics federation -- four times more than in France for example -- stretching oversight resources.

These athletes see running -- and winning -- as the only way out of a life of poverty, and go undetected by the checks and controls as Kenya focuses on its elite athletes.

"There are easily more than 500 top marathon runners... so it is difficult for the federation, given its limited resources, to monitor and control each athlete," says specialist journalist Elias Makori.

"Every weekend, there are dozens of Kenyans winning marathons all over the world."

"In East Africa, unlike anywhere else in the world, hundreds and hundreds of professional athletes make a very good living from road running," says Brett Clothier, director of the Athletics Integrity Unit (AIU), a watchdog set up to police anti-doping in athletics.

"Many of these athletes (...) are never tested out of competition.

"Such athletes have the motivation, opportunity and financial means to boost themselves, and therefore there is a high demand for doping products."

For Brother Colm O'Connell, legendary coach of two-time Olympic 800m champion David Rudisha, the education of athletes is at the heart of combating the scourge.

No one is tracing doping substances stocked by pharmacies and hospitals. The regulation of athletics agents is lax. Allegations of corruption, too, have marred efforts to clean up the sport.

Even identifying athletes can sometimes prove problematic, with runners registered under different names from one document to the next.

Political support is also not assured. Kenya's parliament this year cut funding for ADAK by nearly 15 percent, trimming its budget to around $2.5 million (2.2 million euros).

With the Tokyo Olympics looming less than a year away, Kenya is confident it will avoid a repeat of the Rio Games controversy, even if more work needs to be done.

"For now, there are signs that our joint efforts are working and that we are on the right track," says Clothier.

"The main thing is that the struggle, and close collaboration, with AIU continues."