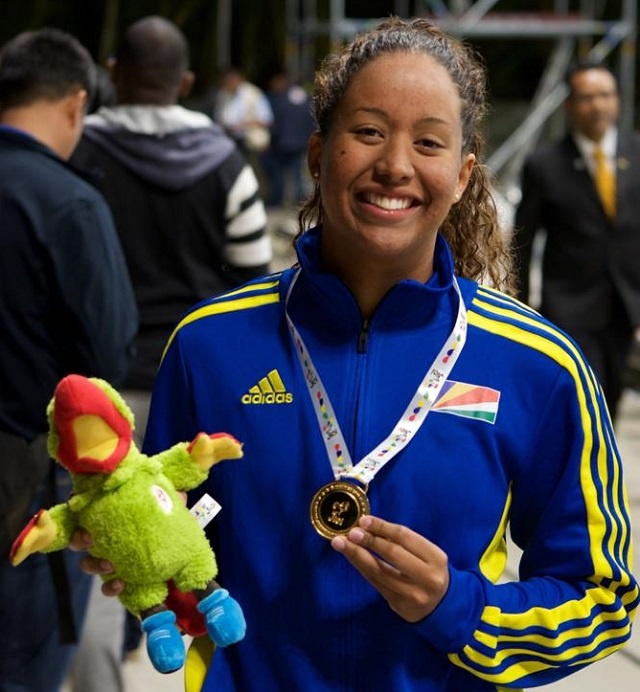 Passon said,"I just went swimming and to have fun and I guess that everything that came with it - the records, the medals - were a bonus crowning the work done."(Ah Men Chan Chin Wah, Mauritius)

(Seychelles News Agency) - Now called the ‘Golden Girl’ of Seychelles, Felicity Passon holds the country’s record for the greatest number of medals won at an Indian Ocean Island Games (IOIG) since the competition started 40 years ago.

The 20-year-old swimmer finished the just-completed competition with seven gold medals, three silver and one bronze.

Passon didn’t only win 11 medals but also broke several game records during her five days of competition. She is currently studying psychology and cognitive science at Southern Methodist University in Texas, USA, while also juggling her swimming career.

SNA met Passon after she landed in the country following the games and another competition in South Korea to talk about her wins, training and future plans.

SNA: You currently hold the record in Seychelles for the most medals won at an IOIG. How does that feel?

FP: It hasn't even settled in yet. I really wasn't expecting it and I keep saying that to everyone. I was expecting three to four gold medals. I didn't even know what the record was for the most medals or what the records were for some of the events that I swam. Every time I got closer to that or I beat a record, it was such a surprise to me. I didn't know Shrone had the most medals before this and when people were saying it I was like "Oh wow! That is pretty cool". I just went swimming and to have fun and I guess that everything that came with it - the records, the medals - were a bonus crowning the work done.

SNA: What were preparations like for the game? Where did you train?

FP: I came back to Seychelles in May and straight after I left for South Africa to train in Pretoria at a high-performance centre. There, I did altitude training which was pretty tough but I needed it to get my endurance up as I knew that I would be swimming in a lot of events. I was there for almost two months, and straight after getting back to Seychelles, we left for Mauritius. Training was good, but I feel that two months is not enough - preparation for IOIG should start straight after one ends.

In America we swim yards (the U.S. unit of measurement) so we do not get to swim in a 50-metre Olympic size pool, so there you need different skill sets. You also lose a lot of endurance and stamina. That is why when I came here, I knew I had to get some intense altitude training in a 50-metre pool to get me back to where I was before and readapt.

SNA: What were the challenges and obstacles leading up to the games and how did you overcome them?

FP: In 2015, I went to the UK where I was studying and swam for a really good club. I always had a heart problem and when I was there it got really bad to the point where I was told that unless I have an operation, I won’t swim again.

Having swum my whole life that was really tough for me because I could not imagine not swimming. Prior to the Olympic Games in 2016, I didn’t swim for almost five months just because I had had my operation done and had to heal. I had to watch all my teammate go training and compete whereas I was merely sitting at home. That was really tough but I had my family's support and they were there for me when I needed them. I was so excited when I could finally go back into the pool as I had missed it so much. I worked really hard and stayed positive.

SNA: Are you part of an international club? Which team is that and how long have you been swimming for the team?

FP: I used to swim for Plymouth in the UK but now I’m no longer associated with them. I swim for Southern Methodist University and have been doing so for two years. In Seychelles, I am part of the national team and swim for my new club, which my parents and I came up with, called Flying Fish Aquatics Seychelles.

I wasn’t part of a club before and technically to go to international competitions you have to be part of a club locally. That is a rule that the swimming federation came up with. I could have easily joined another club but I didn’t want to overstep on anyone and choose a team over another. We decided that it would be easier to come up with my own.

SNA: What other competitions have you taken part in before the IOIG 2019?

FP: I swam at the TYR Pro series in America in April and that was only the competition I did before IOIG, which is not normal for a swimmer. Normally you want to get a lot in practice racing again. I knew that if I had to compete in another competition I would lose out on gaining endurance. I focused on getting fit again and getting a nice block of training before IOIG.

SNA: What led you to swimming and how long have you been practising the sport?

FP: My mum always told me that when I was about 10 months old she would take me swimming, kind of like drop me in the pool and you know, it is a baby's instinct to come up. My parents lived in Dubai when I was born and at three years old, I was doing little swimming lessons and apparently, a lot of people said that I had talents. Then we moved to Seychelles when I was five years old. We moved to La Digue and where there is obviously no swimming pool, so we swam in a hotel pool.

I had Naomi Adeline come to La Digue to give me odd swimming lessons here and there. I was always in the water - be it in the sea or the pool. I could do it all day and not be tired. When I was eight, we moved to Mahe, where I attended Independent School. I didn’t really swim that much there because they never let me swim on the team - I was always reserve. Then I moved to the International School of Seychelles and that is where everything kind of started. At about 13, that is when it got serious. Sir Paul Fanchette took me into the junior national team at the time. That is when I actually went training. That makes seven years of competitive swimming.

SNA: With the IOIG behind your back and 11 medals later, what is next for Felicity?

It is obviously a tougher level of competition and I'll really have to go all out for that. After that, it will be just trying to qualify for next year's Olympic Games. I am really close and actually, I just missed the time in South Korea by 0.6 seconds in a 200-metre race which is nothing. Honestly, I didn’t even expect to swim so close to that after all that travelling. I will be training in Seychelles until the All Africa Games after which I will need to figure out what is best for me in regards to trying to qualify for the Olympics.