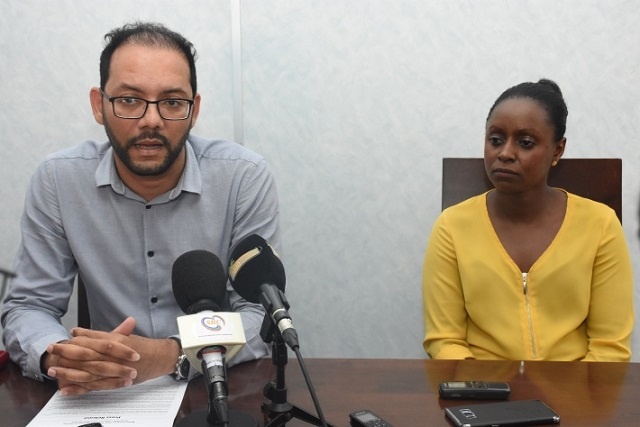 Thesee (left) made the announcement to the press on Wednesday. (Seychelles Nation)

(Seychelles News Agency) - The government of Seychelles has issued a treasury bond worth SCR200 million ($14.6 million) to address excess liquidity and to stabilise spending, inflation and foreign currency holdings, the Principal Secretary of Finance said Wednesday.

“Bonds are ways for the government to collect money so if we need to finance the budget, we can put out this instrument which helps to collect money to finance government projects. However this bond is for monetary policy purposes which means the proceeds will not be spent for the time being, but rather, it will be sitting in a separate account as savings,” said the principal secretary, Damien Thesee.

The Ministry of Finance, Trade, Investment and Economic Planning said there have been 102 successful applications to fund the bond from 96 individuals, four banks and two financial corporations.

The 1770 Bond to commemorate 250 years since the first settlement in Seychelles was also issued for monetary purposes for a period of seven years with an interest rate of seven percent per year. Interest will be paid half-yearly.

Thesee said that issuing the bond is also in line with the objective and financial strategy of the Central Bank of Seychelles to encourage more people to save money.

Successful applicants have until August 5 to make payment. In case of non-payment after the due date, the bond will be re-opened to the public on a first come, first served basis.

The 1770 bond is the second issued this year. In April, the Development Bank of Seychelles issued two bonds, each worth SCR50 million, one for a three-year period with 6 percent interest per annum and the second for five years with an interest rate of 6.5 percent per annum. Both bonds were fully subscribed within the first day.