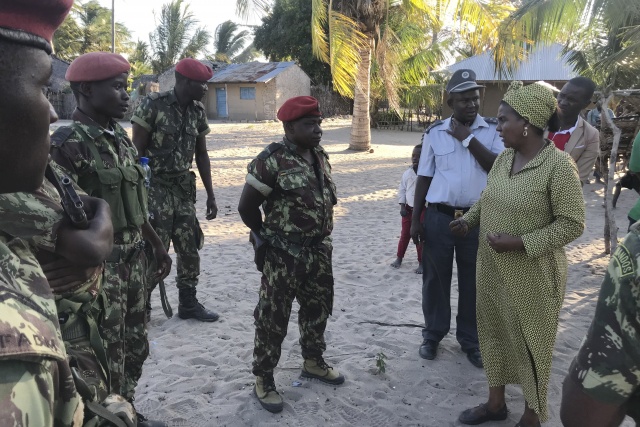 Mozambican Army personnel talks with Nuance Mayor, Joaquina Nordine (2ndR), in Naunde, northern Mozambique, on June 13, 2018. Until last week, Mozambique's northern district of Macomia was a remote and peaceful place, surrounded by dense tropical forests. Today, that tranquility has been brutally shattered and replaced by fear and suspicion. Macomia has become the latest target of a shadowy jihadist force that has terrorised the country's far north since last October, claiming more than 30 lives. In the coastal village of Naunde, seven people were hacked to death and 164 houses were set alight. (Joaquim Nhamirre / AFP)

The signing took place in the Gorongosa National Park in central Mozambique, nearly 27 years after the end of the southern African country's first civil war.

The two leaders hugged after penning the deal on a mounted stage in Gorongosa where a white tablecloth carried the inscription "Peace: Final agreement on cessation of hostilities", according to live broadcasts of the ceremony.

Thursday's agreement brought an end to a long peace negotiation process initiated by Renamo's historic leader, Afonso Dhlakama, who died in May last year, and comes just months before general elections in October.

"We want to assure our people and the world that we have buried the mindset of using violence as a way of resolving our differences," Momade, the new Renamo leader who succeeded Dhlakama, said.

Nyusi said "this agreement opens a new era in the history of our country in which no Mozambican should use weapons to resolve conflicts."

"The act we have just witnessed shows our commitment to permanent and lasting peace," Nyusi said. "Today, August 1, a new child was born."

Soon after Mozambique gained its independence from Portugal in 1975, Renamo fought a brutal 16-year civil war against the Frelimo government, a conflict that left one million people dead before the fighting stopped in 1992.

The rebel movement then entered politics after a 1992 peace pact which was signed in Rome, paving the way for multi-party elections in 1994.

In October 2013 Renamo declared the end of the 1992 peace deal after the military raided its bush camp in central Sathundjira.

Fresh clashes then erupted again between government forces and Renamo soldiers from 2013 to 2016.

Since 2016, the government and Renamo have been in talks, which continued after Dhlakama died from a suspected heart attack.

Despite the end of the civil war and the group transforming into a political party, it retained an armed wing.

On Tuesday Renamo began disarming armed members as part of the peace deal.

Some of the demobilised fighters will be absorbed into the country's army and police, while others will be re-integrated into civilian life.

More than 5,200 Renamo fighters are to expected to surrender their weapons to the government.

The signing of the peace deal comes just months before general elections scheduled for October 15 in the former Portuguese colony, at a time Renamo itself is facing internal divisions.

It also comes as Nyusi's administration is battling a jihadist insurgency in the north, which has claimed more than 250 lives since October 2017, and ahead of the visit to the impoverished country by Pope Francis in September.

Analysts warned that the coming days will be a crucial test of whether the agreement will hold before a final and main agreement scheduled to be signed in Maputo next Tuesday.

Local media reported that unknown gunmen on Wednesday attacked a truck and a bus along the main north-south highway - just hours after Nyusi announced he was going to sign the cessation of hostilities agreement with Renamo.

A small group of disgruntled Renamo members, who have refused to recognise Momade as party chief, last week warned the government against continued negotiations with the new leader.

"The next few days are critical as there have been some reports of hostile action in central Mozambique by some disgruntled RENAMO militia," Vines said.

University of South Africa's international law professor emeritus Andre Thomashausen was less optimistic of what he termed an "elitist" agreement.

"As in the previous cases the arrangements do not offer any attractive outlook for the simple Renamo guerrilla force which remains in part, unstructured and autonomous."

He suggested that the latest agreement provided "retirement comforts" the ageing Renamo leader and "his group of similarly tired generals and commanders, but it offers nothing," to the thousands of fighters being demobilised.