Trump targets China with tariffs on $300bn in goods 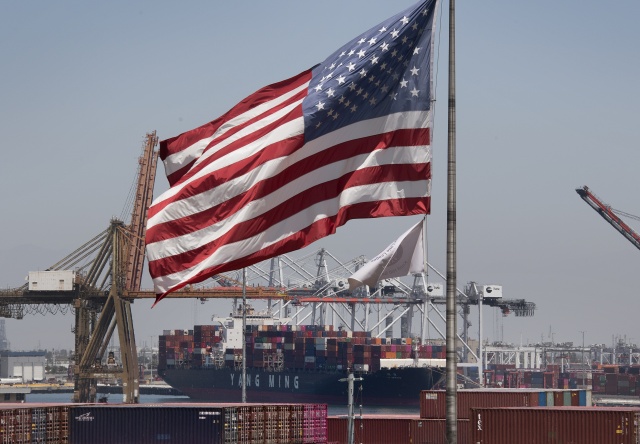 The US flag flies over a container ship unloading it's cargo from Asia, at the Port of Long Beach, California on August 1, 2019. President Donald Trump announced August 1 that he will hit China with punitive tariffs on another $300 billion in goods, escalating the trade war after accusing Beijing of reneging on more promises. (Mark RALSTON / AFP)

(AFP) - US President Donald Trump announced Thursday he will hit China with punitive tariffs on another $300 billion in goods, prompting Beijing to warn it was the wrong way to resolve the trade war.

The 10 percent duties will take effect September 1, and come on top of the 25 percent tariffs on $250 billion in imports already in place.

He later raised the possibility he could increase the duties further.

"The 10 percent is... for a short-term period and then I can always do much more or I can do less, depending on what happens with respect to a deal," Trump said at the White House, adding, "it could be lifted up to well beyond 25 percent."

After resuming face-to-face talks in Shanghai this week, trade negotiators were set to reconvene in Washington in early September for another round of discussions, which means they will take place just after the new tariffs take effect.

"Slapping on tariffs is definitely not a constructive way to resolve economic and trade frictions, it's not the correct way," Chinese Foreign Minister Wang Yi said in brief remarks on the sidelines of a regional meeting of top diplomats in Bangkok on Friday.

China has yet to say whether and how it will retaliate, but it has hinted in recent months that it could restrict exports of rare earths, which are vital to the US tech industry, and it is also working on a blacklist of "unreliable" companies that could target US firms.

When he announced the tariffs on Twitter, Trump said Beijing had agreed "to buy agricultural product from the US in large quantities but did not do so."

"Additionally, my friend President Xi said that he would stop the sale of fentanyl to the United States -- this never happened, and many Americans continue to die!" Trump said, referring to the highly potent and addictive opioid.

Trade relations with China have swung between progress and disaster, appearing to collapse in May only to be revived two months later after a meeting in Japan between Trump and Xi Jinping, his Chinese counterpart.

The leaders declared a truce at that meeting in late June, but the new tariffs make good on a threat Trump made in May.

"The core motivation is the talks clearly weren't going to go anywhere without more pressure on the Chinese," said Derek Scissors, an expert on US-China economic ties at the American Enterprise Institute, a conservative think tank.

"Of course, they could react badly now and the talks could end entirely. It's a measured risk," he told AFP.

In prior tariff rounds, US officials had worked prevent the higher costs from hitting popular consumer items.

Trump has falsely claimed China pays for his mounting tariffs. But Democrats in Congress and business groups say the measures are taxing ordinary consumers and making household goods more expensive.

While other parts of the US economy have begun to slow, the dominant retail sector has been a bright spot, helping to bolster growth despite the general slowdown in most other industrialized nations.

Industries as varied as fashion and oilfield services had pleaded with the Trump administration to hold fire, warning of layoffs, lost markets and fading industrial dominance.

Wall Street dove into the red following Trump's announcement, with retailers hit particularly hard. The Dow Jones Industrial Average was closed down more than one percent.

Despite the red arrows on Wall Street, Trump remained upbeat.

"I'm not concerned about that at all," he told reporters. "I expected that."

But economists say the trade war has increasingly undermined the global manufacturing sector and sapped business sentiment, threatening the world's economy at a time when it is already on the wane.

General » Be a reporter: Write and send your article » Subscribe for news alert
Tags: US, China, economy, politics, trade