President of Maldives arrives in Seychelles on first state visit 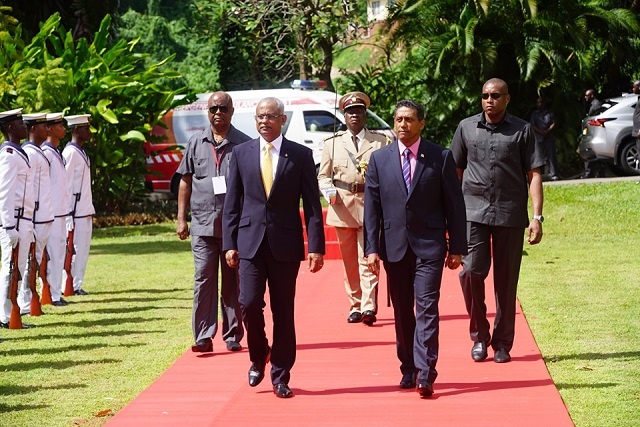 The Maldivian President was welcomed by President Danny Faure and his Cabinet of Ministers at State House on Friday morning. (State House/Facebook)

(Seychelles News Agency) - The President of Maldives, Ibrahim Mohamed Solih, arrived in Seychelles on Friday on his first state visit.

Solih was greeted by a delegation led by the Designated Minister, Macsuzy Mondon, upon arrival at the Seychelles International airport at Pointe Larue on the east coast of the main island, Mahe, Friday morning.

Shortly afterward, the Maldivian President was welcomed by President Danny Faure and his Cabinet of Ministers at State House for an inspection of the guard of honour ceremony.

The ceremony was followed by a meeting between the two leaders.

Solih is on a two-day visit during which he will hold bilateral talks with other government officials on areas of cooperation in tourism, the Blue Economy, fisheries, youth and sports.

The Maldives will be hosting the 11th edition of the Indian Ocean Island Games in 2023 for the first time in the history of the regional competition which takes place every four years.

As small island states, Seychelles, an archipelago in the western Indian Ocean, and the Maldives share many challenges and concerns. The visit will be geared towards the enhancement of bilateral relations that are of benefit to both countries.

The President of Maldives will leave Seychelles on Sunday, August 4.

Diplomacy » Be a reporter: Write and send your article » Subscribe for news alert
Tags: Cabinet of Ministers, Blue Economy