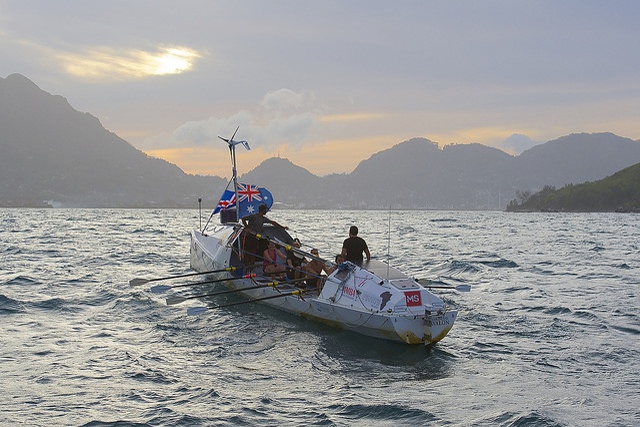 (Seychelles News Agency) - After rowing nonstop for 57 days, a seven-member rowing crew landed on the Seychelles main island of Mahé in the Indian Ocean at 6.58 pm local time Thursday August 7, surely tired but happy to have broken two world records.

The Rossiter’s Avalon have recorded the fastest-ever crossing of the Indian Ocean in a rowing boat on top of achieving the longest rowing record.

The team was led by Scottish skipper Leven Brown, who together with Jamie Douglas-Hamilton, Tim Spiteri, Fiann Paul, Shane Usher, Cameron Bellamy and Heather Rees-Gaunt left Geraldton, Australia on June 11 and have kept rowing 24 hours a day in two hourly shifts to reach Seychelles in 57 days.

Speaking to SNA in a phone interview, Brown said the current speed record for rowing the Indian Ocean in a traditional boat is 2.27 knots while the Rossiter’s Avalon’s average speed was 2.66 knots.

The previous record belonged to "tRIO" comprising of Maxime Chaya, Livar Nysted and Stuart Kershaw, who also started rowing from Geraldton, Western Australia ending in the Indian Ocean island of Mauritius. That was from June 9 to August 5, 2013.

With regards to the distance, Brown said there are two places to choose from for the Indian Ocean rowing expedition and that is Mauritius and Seychelles, adding that they chose Seychelles because they wanted to break the record in terms of the longest distance rowed.

According to Brown, they travelled some 4,500 miles compared to the “trio” that travelled a little over 3,500 miles in 2013 from Geraldton Australia to Mauritius on their own Indian Ocean row expedition.

The seven crew members comprising of 6 men and only one lady hailing from the Britain, Australia, Iceland, South Africa and Wales said they are extremely proud having made it despite several challenges.

Speaking to the local press upon arrival in the Seychelles Port of Victoria on Thursday, the crew explained how they survived three capsizes in gigantic seas in the tail end of a hurricane and a collision with what was thought to be a blue whale.

They also had to evacuate a crew member after an injury.

“The boat’s Automated Information System (AIS) aerial was also knocked off, three oars were broken and her auto-helm was destroyed, depriving the team of a rower on each shift as steering had to be done manually,” they said.

Avalon’s skipper Leven Brown is also the Director of Ocean Row Events an organisation that put together such expeditions in a quest to break records and raise money for good causes.

He has broken seven world records and is the only person in history to hold both the North Atlantic and mid-Atlantic speed records simultaneously.

For the Indian Ocean row which has just ended, the 7 member team were raising money for Save the Elephants to help in their on-going battle against the ivory trade for which they say they have raised thousands of pounds.

“It’s been one of the most remarkable voyages and I am very proud to be flying the flag for Save the Elephants,” said Brown.

“I cannot begin to describe the immense sense of achievement we all feel having completed this epic adventure. I personally feel very honoured to follow in my grand-father’s footsteps of achieving a world’s first as he was the first man to fly over Mount Everest. I am happy to highlight the cause of Save the Elephants since these wonderful creatures are under great threat from illegal killing for ivory and desperately need help,” said Jamie Douglas-Hamilton, one of the rowers.

Apart from save the Elephant other charitable organisations for which Ocean row events has organised such expeditions worldwide include Multiple Sclerosis Research Australia, the Fiann Paul Foundation, which strives to provide educational opportunities and raise awareness of the plight of the Himalayan children worldwide, Hafal (mental health) organisation in Wales working with people recovering from severe mental illness, and the Ubunye Challenge/Angus Gillis Foundation that works to raise money to support and enable communities in some of the poorest and most underdeveloped rural areas of South Africa and Zimbabwe.

The Avalon’s skipper on the other hand is spending a few more days in the island nation hoping to leave on Wednesday.

Brown told SNA that for his next expedition comprising of an 8 member elite rowing crew, he is hoping to beat the 30-day record for rowing across the Atlantic from Gran Canaria’s Puerto Mogan to Port St Charles in Barbados.