Double shootings heighten fears of 'white terrorism' in US 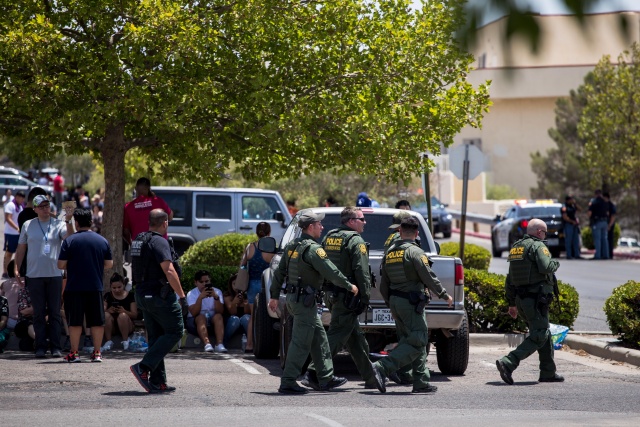 Customs and Border Patrol police walk past individuals that were evacuated from Cielo Vista Mall and a Wal-Mart where a shooting occurred in El Paso, Texas, Saturday, Aug. 3, 2019.
A shooting at a Walmart store in Texas left multiple people dead. At least one suspect was taken into custody after the shooting in the border city of El Paso, triggering fear and panic among weekend shoppers as well as widespread condemnation. It was the second fatal shooting in less than a week at a Walmart store in the US and comes after a mass shooting in California last weekend. (Joel Angel JUAREZ / AFP)

(AFP) - Armed with assault rifles and clad in combat gear, two white men methodically gunned down nearly 30 people over the weekend, underscoring fears that "white terrorism" is now the main threat in the United States.

Amid rising grief and a clamor for action after the shootings in Texas and Ohio, and earlier in several other cities, politicians of both parties called for the federal government to take that threat more seriously, with some Democrats accusing President Donald Trump of dangerously fanning racial tensions.

"It is very clear that the loss of American life in Charleston, in San Diego, in Pittsburgh and by all appearances now in El Paso, too, is symptomatic of the effects of white nationalist terrorism," Democratic presidential candidate Pete Buttigieg said Sunday, naming the scenes of mass shootings that targeted blacks, Jews and, apparently, Hispanics.

In El Paso, situated on the border with Mexico, more than eight in 10 residents are of Hispanic descent. The accused shooter, a 21-year-old white man identified in media reports as Patrick Crusius, had come from far away Dallas with the apparent intent of inflicting mass carnage.

Armed with an assault rifle, the shooter killed 20 people and wounded 26 before surrendering to police.

An online manifesto, attributed to the assailant, railed against a "Hispanic invasion" and referred approvingly to the March 15 massacre by a white supremacist at two mosques in Christchurch, New Zealand that killed 51 people.

Six of the 20 people killed in the shooting were Mexican nationals, the country's president, Andres Manuel Lopez Obrador, said Sunday.

Thirteen hours after the El Paso attack, another white man is accused of spreading terror in the Midwestern city of Dayton, Ohio, killing nine people including his sister, authorities said. Police named him as Connor Betts, 24.

While police say the motive is still unclear, six of the nine people killed in Dayton were black.

"What you have here is two things coming together," Buttigieg, the mayor of South Bend, Indiana, said on "Fox News Sunday."

"One, the weak gun safety policies of this country. And two, the rise of domestic terrorism inspired by white nationalists... we (have) got to do something about it."

Trump, in denouncing the El Paso shooting on Twitter as "an act of cowardice," said nothing about the suspect's possible motives.

He later stated that "hate has no place in our country," but also blamed mental illness for the violence.

El Paso's Republican mayor, Dee Margo, seemed to discount any race angle, reducing the tragedy there to the "pure evil" act of a "deranged" man.

Even some Republicans, however, saw that sort of explanation as inadequate.

"I believe fighting terrorism remains a national priority, and that should include standing firm against white terrorism," tweeted George P. Bush, a high-ranking Texas official who is the nephew of former president George W. Bush.

"This is a real and present threat."

Republican Senator Ted Cruz of Texas tweeted that "what we saw yesterday was a heinous act of terrorism and white supremacy. There is no place for this... anywhere across our nation."

Even Trump's daughter Ivanka, a White House adviser, tweeted about the problem, saying, "White supremacy, like all other forms of terrorism, is an evil that must be destroyed."

For years, some analysts have warned that the huge shifting of intelligence and security assets toward fending off foreign threats after the 9/11 attacks had come at the expense of needed attention to domestic dangers.

But administration officials say they have taken the threat seriously.

FBI Director Christopher Wray testified last month in Congress that a majority of the domestic terrorism cases the bureau had investigated in the previous nine months were motivated by some version of "white supremacist violence." He said his agency was "aggressively" investigating such crimes.

In 2017 and 2018, according to the New America analysis center, violence from the far right claimed more victims in the United States than jihadist attacks.

But Robert McKenzie, an analyst with New America, wrote earlier this year that "even during the Obama administration, intelligence agencies often ignored right-wing threats for political reasons."

One thing that did change after Trump's election in 2016 was the tone of the public debate.

The president has often denounced an "invasion" of migrants, he refused to explicitly condemn the far-right demonstrators at the violent 2017 protest in Charlottesville, Virginia, and he recently called for four young members of Congress, all women of color, to "go back" to their countries of origin.

"The president is encouraging greater racism, and not just the racist rhetoric but the violence that so often follows," O'Rourke said on CNN.

"It's not just President Trump, but he's certainly the person in the position of greatest public trust... most responsible for it."

General » Be a reporter: Write and send your article » Subscribe for news alert
Tags: US, shooting, racism, politics