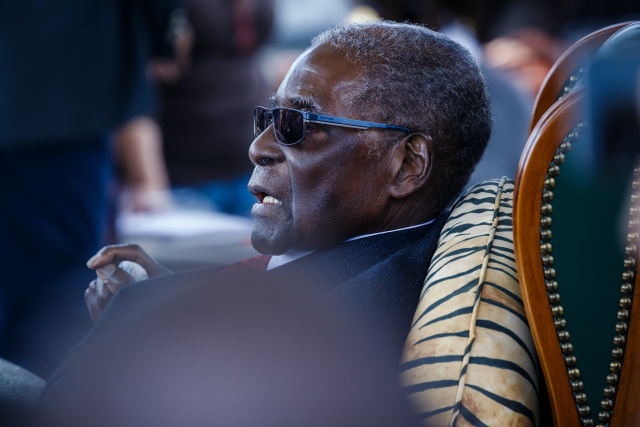 (FILES) In this file photo taken on July 29, 2018 Zimbabwe former President Robert Mugabe addresses the media during a press conference held at his "Blue Roof" residence in Harare. Zimbabwe's ex-leader Robert Mugabe remains hopsitalised in Singapore where he has been receiving medical care for four months, his successor President Emmerson Mnangagwa said on August 5, 2019. Mnangagwa said in a statement that the 95-year-old Mugabe had been receiving medical care for an undisclosed ailment, and was responding well to treatment. (Jekesai NJIKIZANA / AFP)

Mnangagwa said in a statement that the 95-year-old Mugabe had been receiving medical care for an undisclosed ailment, and was responding well to treatment.

"Founding president and founding father of our nation (comrade) Robert Mugabe remains detained at a hospital in Singapore where he is receiving medical attention," Mnangagwa said.

"Unlike in the past when the former president would require just about a month for this, his physicians this time around determined that he be kept under observation for much longer from April this year when he left for his latest routine check-up."

Mnangagwa who announced in November last year that Mugabe was now unable to walk because of ill-health and old age, said he had sent a team including chief secretary to cabinet Misheck Sibanda, to Singapore last week to check on the former ruler.

"I am greatly pleased to inform the nation that the former president continues to make steady progress towards eventual recovery and that his condition is remarkably stable for his age," Mnangagwa said.

The team that visited Mugabe reported that he was "responding well to treatment" and that "because of the good progress he is making (comrade) Mugabe could be released fairly soon."

When the government announced in April that he had gone to Singapore for medical treatment in May, it said that he was expected back home mid-May.

Zimbabwe's public health services have practically collapsed and those who can afford it seek treatment in South Africa or further abroad. Mugabe during his time in power sought almost all his medical care in Singapore.

Mnangagwa took over in November 2017 with the backing of the military, ending Mugabe's 37-year rule. He went on to be elected in disputed elections in July last year.

He has vowed to revive Zimbabwe's ailing economy by attracting much needed foreign direct investment but months after his election, the ghost of the country’s past economic woes have returned to haunt the country including shortages of bread and fuel and power cuts lasting up to 18 hours.