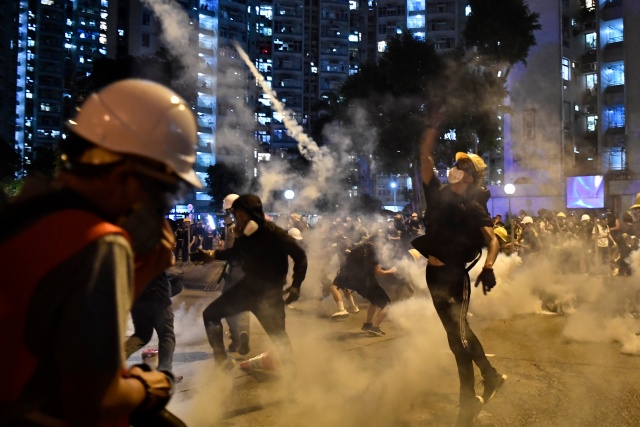 Protesters throw back tear gas fired by the police in Wong Tai Sin during a general strike in Hong Kong on August 5, 2019, as simultaneous rallies were held across seven districts. Hong Kong riot police clashed with pro-democracy protesters for a third straight day on August 5 as the city's leader warned the global financial hub was nearing a "very dangerous situation", and a rare strike caused transport chaos. (Anthony WALLACE / AFP)

(AFP) - China warned Hong Kong protesters Tuesday that "those who play with fire will perish by it", adding the immense strength of the central government should not be underestimated.

The comments represent one of the strongest-worded warnings yet from China's central government over protests in the semi-autonomous city, which has been plunged into chaos by weeks of clashes.

At a press briefing in Beijing, Yang Guang, spokesman for the Hong Kong and Macao Affairs Office of the State Council, said the "radical protests... have severely impacted Hong Kong’s prosperity and stability, pushing it into a dangerous abyss".

The protests were triggered by opposition to a planned law that would have allowed extraditions to mainland China, but have evolved into a wider movement for democratic reform and the protection of freedoms.

Yang said the government still "firmly supports" both the Hong Kong police force -- who have been criticised for their handling of the protests -- and Carrie Lam, the city's pro-Beijing leader who protesters want to resign.

In a strong warning aimed at the "criminals" behind the unrest, Yang said: "Don't ever misjudge the situation and mistake our restraint for weakness... Don't ever underestimate the firm resolve and immense strength of the central government."

Yang was speaking at a press conference held by China's cabinet-level State Council in Beijing about the unrest.

Such media briefings are normally very rare, but Tuesday's was the second in as many weeks.

The clashes have piled pressure on Chinese President Xi Jinping, and led to speculation that Beijing might be forced to intervene in some capacity, even militarily.

Yang, however, seemed to downplay any idea of mainland police or military helping with law enforcement, saying the Hong Kong government was "fully capable of punishing the violent crime in accordance with the law, restore order to society, and restore stability to society".

The protests on Monday paralysed the subway system during morning peak hour, led many shops to close and delayed scores of international flights.

In a press conference in Hong Kong, Lam warned the city was nearing a "very dangerous situation" as she framed the protests as a challenge to China's sovereignty.

"I dare say they are trying to destroy Hong Kong," said Lam.