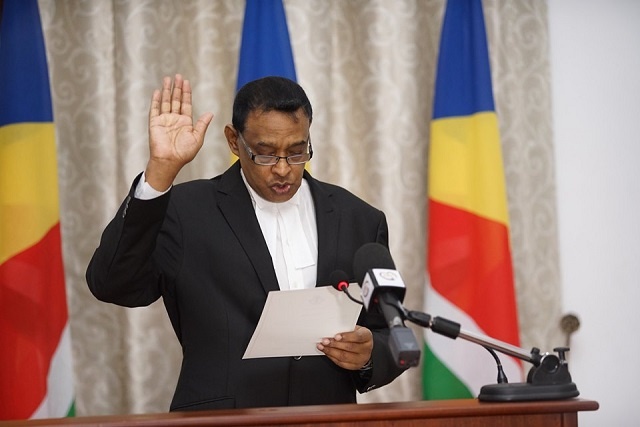 Justice Fekna was sworn into office on June 27th  as a non-resident Justice of Appeal. (State House/Facebook)

(Seychelles News Agency) - A Mauritian judge on the Seychelles’ Court of Appeal passed away on Tuesday following a short illness, State House said in a communiqué.

President Danny Faure expressed his deep condolences to the family of Justice Prithviraj Fekna, who died in Seychelles Hospital.

Justice Fekna, 54, was sworn into office on June 27th  as a non-resident Justice of Appeal in the Seychelles' Court of Appeal.  Prior to his appointment, he was a judge of the Mauritius Supreme Court since his appointment in 2011.

The Court of Appeal held a short ceremonial sitting on Wednesday in honour of Justice Fekna in the presence of three of his family members, judges of the Supreme Court, the Magistrates and the members of the Bar.

The President of the Court of Appeal, Francis MacGregor, expressed his condolences to the family and reflected on Judge Fekna’s impressive career as a member of the Supreme Court of Mauritius as well as a teacher for the judicial training institute in Mauritius.

Chief Justice Mathilda Twomey also expressed her condolences and stated that the Court of Appeal regretted that they had not had enough of an opportunity to work with Justice Fekna who was warm, kind and diligent in his work.

She referred to Justice Fekna as “a great Justice of Appeal that Seychelles never had.” Justice Fernando shared a short reflection on Justice Fekna’s enthusiasm in working with legal education in Seychelles.

The Court observed a moment of silence in Justice Fekna’s honour and adjourned all of the cases for the day.

The Indian Ocean News network quoted the Chief Justice of Mauritius, Eddy Balancy, who said, “I was deeply shocked when I learned of the death of Judge Fekna in Seychelles. He was a very dedicated judge who spared no effort to find a solution to a legal problem. He also taught law with passion.”

“He was very much appreciated by his colleagues and will be sorely missed at the Supreme Court. I extend my deepest sympathies to his family and to all those who are mourning,” Balancy said, according to the news network.

The Seychelles' Court of Appeal is the final appellate court in the 115 island archipelago in the western Indian Ocean. The Court has three sessions a year usually in April, August and December.