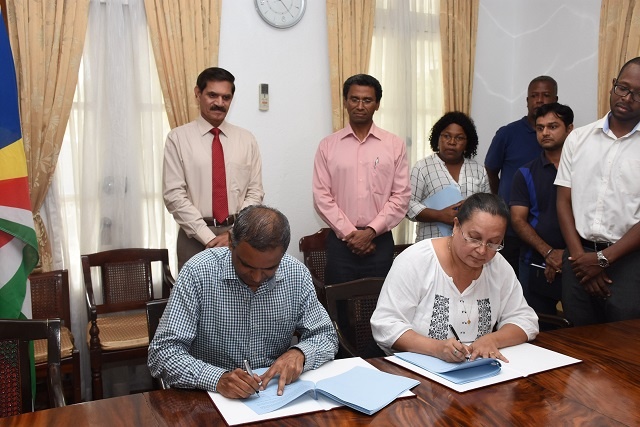 The projects, to be implemented by the departments of education and local government, received their grant on Wednesday afternoon during a ceremony at the Department of Foreign Affairs.

The projects include renovation and construction of boundary walls at some schools in the island nation as well as the construction of a multi-purpose court and access roads in various districts.

“The objective of the project is that it should reach common people and that is why a minimum of one project has been identified in each district,” said Suhag.

He added that once the fully-funded projects are completed others will be taken up.

“When I was accredited, I said the priority was high-impact community-based projects because we want to fund projects that are going to touch the lives of the common citizens,” said the High Commissioner.

The Ministry of Education and Human Resource Development is benefiting with around SCR 9 million ($660,000) from the grant.

The Principal Secretary for Higher Education and Human Resource Development, Linda Barallon, said this is a plus for her ministry which usually relies mainly on the government budget to implement projects.

“Sometimes the budget allocated for improvement is not enough to cater for all schools so this grant is welcomed as it would allow us to undertake some pressing project at some schools such as renovation and construction of boundary walls,” said Barallon.

The projects will be undertaken during the August school holidays which starts on Monday, August 12 and expected to end in time for the start of the third term.

The Principal Secretary for Local Government, Marie-Celine Vidot, said her department has identified 22 projects to carry out in two phases.

“We used a set of criteria to prioritise the list and these projects which include the construction of new access roads and a multi-purpose court for the island of La Digue, will be completed in the next five months,” said Vidot.

She added that the department looked at the projects that would benefit young people and elderly citizens.

Wednesday’s signing was done between the departments receiving the grants and the contractors that will be undertaking the projects.

So far, Seychelles, an archipelago in the western Indian Ocean, have identified 32 high impact community projects to be financed under the Indian grant.

During President Danny Faure’s visit to India, the Indian government announced that it would assist Seychelles with various projects including the construction of a new police headquarters, an Attorney General’s office, a government house, an international convention centre and the Magistrate’s Court.